After their parents divorced in the 1970s, Andre Dubus III and his three siblings grew up with their exhausted working mother in a depressed Massachusetts mill town saturated with drugs and crime. To protect himself and those he loved from street violence, Andre learned to use his fists so well that he was even scared of himself. He was on a fast track to getting killed—or killing someone else. He signed on as a boxer.

Nearby, his father, the eminent Louisiana-born author Andre Dubus II, taught on a college campus and took the kids out on Sundays. The clash of worlds couldn’t have been more stark—or more difficult for a son to communicate to a father. Only by becoming a writer himself could Andre begin to bridge the abyss and save himself.

"Beautifully written and bursting with life, the book tells the story of a boy struggling to express his 'hurt and rage,' first through violence aimed at school and barroom bullies and ultimately through the power of words.... His compassionate memoir abounds with exquisitely rendered scenes of fighting, cheating, drugging, drinking, and loving. A striking, eloquent account of growing up poor and of the making of a writer." —Kirkus Reviews 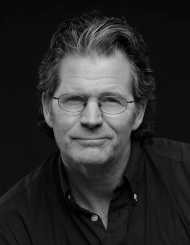 Andre Dubus III’s seven books include the New York Times’ bestsellers House of Sand and Fog, The Garden of Last Days, and his memoir, Townie. His most recent novel, Gone So Long, has been named on many “Best Books” lists, including The Boston Globe’s “Twenty Best Books of 2018”. Mr. Dubus has been a finalist for the National Book Award, and has been awarded a Guggenheim Fellowship, The National Magazine Award for Fiction, two Pushcart Prizes, and is a recipient of an American Academy of Arts and Letters Award in Literature. His books are published in over twenty-five languages, and he teaches full-time at the University of Massachusetts Lowell.

Richard Russo is the author of nine novels, most recently the best-selling Everybody's Fool and That Old Cape Magic, and the memoir Elsewhere. In 2002 he received the Pulitzer Prize for Empire Falls, which, like Nobody’s Fool, was adapted to film, in a multiple-award-winning HBO miniseries. He was born in Johnstown, New York and currently resides in Portland, Maine.

This event is now sold out. Tickets may be picked up at the Brattle Theatre when the doors open, starting at approximately 5:30pm on March 1.