Our Revolution:
A Future to Believe In

At an event presented by Harvard Book Store, Boston Review, and the MIT Department of Political Science, U.S. Senator BERNIE SANDERS will discuss his experiences as a presidential candidate and his thoughts about the political process. His talk will be based in part on the ideas presented in his latest book, Our Revolution: A Future to Believe In. As a part of the evening's presentation, Senator Sanders will be joined on-stage for a Q&A moderated by ARCHON FUNG, Academic Dean and Ford Foundation Professor of Democracy and Citizenship at the Harvard Kennedy School.

Update: This Event Is Now Sold Out

Tickets for this event are now sold out. Sign up for our waitlist at berniemit.eventbrite.com to be notified if any additional tickets become available. There will be not be a standby line for this event.

This event does not include a book signing. All tickets include a copy of Our Revolution, and a limited and randomly selected number of ticket purchasers will receive a signed copy. These are copies of the book with bookplates signed by the senator. We are not able to accommodate any requests for signed books.

There is not dedicated event parking at Kresge Auditorium. Public transportation to the venue is advised.

Seating is general admission. Doors will open approximately an hour before the event. Tickets are limited to four (4) per order and are available online only through Harvard Book Store.

Please leave large bags, purses, and personal items at home. Large bags will not be permitted.

When Bernie Sanders began his race for the presidency, it was considered by the political establishment and the media to be a “fringe” campaign, something not to be taken seriously. After all, he was just an Independent senator from a small state with little name recognition. His campaign had no money, no political organization, and it was taking on the entire Democratic Party establishment.

By the time Sanders’s campaign came to a close, however, it was clear that the pundits had gotten it wrong. Bernie had run one of the most consequential campaigns in the modern history of the country. He had received more than 13 million votes in primaries and caucuses throughout the country, won twenty-two states, and more than 1.4 million people had attended his public meetings. Most important, he showed that the American people were prepared to take on the greed and irresponsibility of corporate America and the 1 percent.

In Our Revolution, Sanders shares his personal experiences from the campaign trail, recounting the details of his historic primary fight and the people who made it possible. And for the millions looking to continue the political revolution, he outlines a progressive economic, environmental, racial, and social justice agenda that will create jobs, raise wages, protect the environment, and provide health care for all—and ultimately transform our country and our world for the better. For him, the political revolution has just started. The campaign may be over, but the struggle goes on. 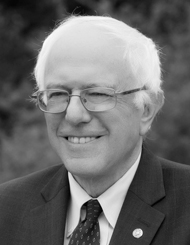 Bernie Sanders ran as a Democratic candidate for President of the United States in 2015 and 2016. He served as mayor of Burlington, Vermont’s largest city, for eight years before defeating an incumbent Republican to be the sole congressperson for the state in the U.S. House of Representatives in 1991. He was elected to the Senate in 2007 and is now in his second term, making him the longest-serving independent in the history of the Congress. He lives in Burlington, Vermont, with his wife, Jane, and has four children and seven grandchildren.

Tickets for this event are sold out. Sign up for our waitlist to be notified if any additional tickets become available. There will be not be a standby line for this event. Books bundled with e-tickets may only be picked up at the venue the night of the event, and cannot be picked up in-store beforehand.

By Subway
Take the Red Line to the Central Square Station. The walk from Central Square takes about 10 minutes and takes you right down Massachusetts Avenue.

By Bus
The No. 1 (Dudley/Harvard Station) bus stops at MIT on Massachusetts Avenue and provides transportation to Central Square and Harvard Square (Northbound), and Boston (Southbound). The MIT stop is at a large crosswalk with a stoplight. On one side of the street are steps leading up to large Ionic columns and the small dome of MIT; on the other side of the street is the Stratton Student Center and Kresge Auditorium.

Parking
Driving to Kresge Auditorium is not advised. There is no dedicated event parking for this event.