The Fighters:
Americans in Combat in Afghanistan and Iraq

Harvard Book Store welcomes Pulitzer Prize–winning journalist C.J. CHIVERS for a discussion of his latest book, The Fighters: Americans in Combat in Afghanistan and Iraq.

More than 2.7 million Americans have served in Afghanistan or Iraq since September 11, 2001. C.J. Chivers reported from both wars from their beginnings. The Fighters vividly conveys the physical and emotional experience of war as lived by six combatants: a fighter pilot, a corpsman, a scout helicopter pilot, a grunt, an infantry officer, and a Special Forces sergeant.

Chivers captures their courage, commitment, sense of purpose, and ultimately their suffering, frustration, and moral confusion as new enemies arise and invasions give way to counterinsurgency duties for which American forces were often not prepared.

The Fighters is a tour de force, a portrait of modern warfare that parts from slogans to do for American troops what Stephen Ambrose did for the G.I.s of World War II and Michael Herr for the grunts in Vietnam. Told with the empathy and understanding of an author who is himself an infantry veteran, The Fighters presents the long arc of two wars.

“The Fighters is a rare book that thrusts the reader straight into the sweaty, filthy, exhausted reality of war while also revealing the broad sweep and scope of our nation’s struggles. It joins the best war literature this country has ever produced.” —Sebastian Junger, bestselling author of Tribe and War

“As one of America's greatest war correspondents, C.J. Chivers knows that the closest thing to truth in war comes from the people at the far end of policy, those who have done the fighting, are fighting now, and will be fighting forever. This book is that truth, brilliantly told. Courageous in its reporting and shining in its humanity, The Fighters is a defining document of what war truly is.” —David Finkel, Pulitzer Prize–winning author of Thank You For Your Service

“A riveting, heart-rending, and chastening account of the Americans who are waging wars that the rest of us have already chosen to forget. It is a gift to the nation, both deeply moving and profound in its implications.” —Andrew J. Bacevich, bestselling author of America's War for the Greater Middle East 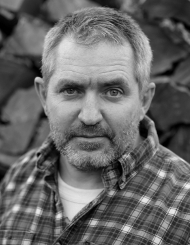 C.J. Chivers is a senior writer for The New York Times and a writer-at-large for The New York Times Magazine. His magazine story The Fighter won the 2017 Pulitzer Prize in Feature Writing. In 2009 he was part of a team that won the Pulitzer Prize for International Reporting for coverage from Afghanistan and Pakistan. Chivers served as an infantry officer in the United States Marine Corps in the Persian Gulf War and on peacekeeping duty during the Los Angeles riots. He is also the author of The Gun.