Harvard Book Store welcomes data scientist CATHY O'NEIL for a discussion of Weapons of Math Destruction: How Big Data Increases Inequality and Threatens Democracy, her book on the mathematical models that pervade modern life and threaten to rip apart our social fabric.

About Weapons of Math Destruction

We live in the age of the algorithm. Increasingly, the decisions that affect our lives—where we go to school, whether we get a car loan, how much we pay for health insurance—are being made not by humans, but by mathematical models. In theory, this should lead to greater fairness: Everyone is judged according to the same rules, and bias is eliminated.

But as Cathy O’Neil reveals in this urgent and necessary book, the opposite is true. The models being used today are opaque, unregulated, and uncontestable, even when they’re wrong. Most troubling, they reinforce discrimination: If a poor student can’t get a loan because a lending model deems him too risky (by virtue of his zip code), he’s then cut off from the kind of education that could pull him out of poverty, and a vicious spiral ensues. Models are propping up the lucky and punishing the downtrodden, creating a “toxic cocktail for democracy.” Welcome to the dark side of Big Data.

Tracing the arc of a person’s life, O’Neil exposes the black box models that shape our future, both as individuals and as a society. These “weapons of math destruction” score teachers and students, sort résumés, grant (or deny) loans, evaluate workers, target voters, set parole, and monitor our health.

O’Neil calls on modelers to take more responsibility for their algorithms and on policy makers to regulate their use. But in the end, it’s up to us to become more savvy about the models that govern our lives. This important book empowers us to ask the tough questions, uncover the truth, and demand change.

“Cathy O’Neil has seen Big Data from the inside, and the picture isn’t pretty. Weapons of Math Destruction opens the curtain on algorithms that exploit people and distort the truth while posing as neutral mathematical tools. This book is wise, fierce, and desperately necessary.” —Jordan Ellenberg, University of Wisconsin-Madison, author of How Not To Be Wrong

“Even as a professional mathematician, I had no idea how insidious Big Data could be until I read Weapons of Math Destruction. Though terrifying, it’s a surprisingly fun read: O’Neil’s vision of a world run by algorithms is laced with dark humor and exasperation—like a modern-day Dr. Strangelove or Catch-22. It is eye-opening, disturbing, and deeply important.” —Steven Strogatz, Cornell University, author of The Joy of x

“This taut and accessible volume, the stuff of technophobes’ nightmares, explores the myriad ways in which largescale data modeling has made the world a less just and equal place.  O’Neil speaks from a place of authority on the subject . . . Unlike some other recent books on data collection, hers is not hysterical; she offers more of a chilly wake-up call as she walks readers through the ways the ‘big data’ industry has facilitated social ills such as skyrocketing college tuitions, policing based on racial profiling, and high unemployment rates in vulnerable communities . . . eerily prescient.” —Publishers Weekly 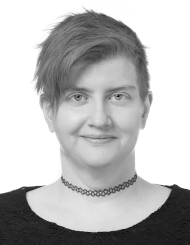 Cathy O’Neil is a Bloomberg Opinion columnist. She is a mathematician who has worked as a professor, hedge-fund analyst and data scientist. She founded ORCAA, an algorithmic auditing company, and is the author of Weapons of Math Destruction.