Sprawling across an epic landscape of deserts, harems, and modern industrial clutter, Habibi tells the tale of Dodola and Zam, refugee child slaves bound to each other by chance, by circumstance, and by the love that grows between them. We follow them as their lives unfold together and apart; as they struggle to make a place for themselves in a world (not unlike our own) fueled by fear, lust, and greed; and as they discover the extraordinary depth—and frailty—of their connection.

"Thompson's first graphic novel in seven years is a lushly epic love story that's both inspiring and heartbreaking, intertwined with parables from both Islam and Christianity. Sold into marriage as a young girl, Dodola endures life as the wife of a scribe until she's captured by slave traders and brought to Wanatolia to be auctioned off. But before she can be sold again, she escapes, taking with her an abandoned toddler named Habibi. The pair runaway to the desert, taking refuge in an abandoned boat, where they survive for nine years, with Dodola teaching Zam the ways of the world through stories from the Qur'an and the Bible. When Zam is 12, he secretly follows Dodola and realizes that she has been prostituting herself to passing caravans in order to acquire food. They are separated when Dodola is taken against her will to become part of a sultan's harem, leaving Zam alone in the desert. Six long years pass as the two struggle to find their way back to each other and, overcoming enormous odds, eventually end up far from the ancient desert landscape in a contemporary metropolis that underscores Thompson's subtle ability to blend the timeless and the current. In addition to richly detailed story panels, the gorgeous Arabic ornamental calligraphy makes each page an individual work of art." —Publishers Weekly (starred) 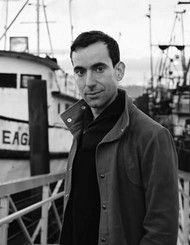 Online ticket sales for this event have ended. Tickets can still be purchased at Harvard Book Store and by phone at 617-661-1515 until approximately 4:30 on Wednesday, September 21, at which point any remaining ticket sales will be handled at the doors of the event. Tickets purchased online can be picked up at the Brattle Theatre when doors open around 5:30pm.