While payment is not required, we are suggesting a $5 contribution to support this author series, our staff, and the future of Harvard Book Store—a locally owned, independently run Cambridge institution. In addition, by purchasing a copy of A Banker’s Journey on harvard.com, you support indie bookselling and the writing community during this difficult time.

About A Banker’s Journey

Who was Edmond J. Safra? “The greatest banker of his generation,” in the estimation of a former World Bank President. The founder of four massive financial institutions on three continents, and a proud child of Beirut’s Jewish quarter. An innovative avatar of financial globalization, and a faithful heir to a tradition of old-world banking. The leading champion and protector of the Sephardic diaspora.

In A Banker’s Journey, financial journalist and historian Daniel Gross, who, like Safra, traces his heritage to Aleppo, Syria, reconstructs the public life of an intensely private man. With exclusive access to Safra’s personal archives, Gross tracks the banker’s remarkable journey from Beirut to Milan, São Paulo, Geneva, and New York—to the pinnacle of global finance.

Edmond Safra was fifteen in 1947, when his father sent him to establish a presence in Milan, Italy. Fluent in six languages, and with an eye for value, managing risk, and personal potential, Safra was in perpetual motion until his tragic death in 1999. The modern, global financial empire he built was based on timeless principles: a banker must protect his depositors and avoid excessive leverage and risk. In an age of busts and bailouts, Safra posted remarkable returns while rarely suffering a credit loss.

From a young age, Safra assumed the mantle of leadership in the Syrian-Lebanese Jewish community, providing personal aid, supporting the communities that formed in exile, and championing Sephardic religious and educational efforts in Israel and around the world.

Edmond J. Safra’s life of achievement in the twentieth century offers enduring lessons for those seeking to make their way in the twenty-first century. He inspired generations to make the world a better place.

Praise for A Banker’s Journey

“Edmond Safra's extraordinary life is one of the most fascinating stories in modern finance, but the story runs much deeper than his legendary success. A Banker's Journey captures the fullness of a man whose mind for business and appetite for adventure was matched only by his heart for giving and sense of responsibility to others. His impact continues to be felt, and now the inspiring lessons from his life will reach an even wider audience.” —Michael R. Bloomberg, founder of Bloomberg LP and former mayor of New York City

“Most readers will know Edmond J. Safra as a towering banker who helped define the modern economic era. Daniel Gross’s vibrant account will make them aware of Safra’s open-handed humanitarian instinct that stood in equal measure to his financial genius—an instinct that continues ‘repairing the world’ to this day. His legacy of a deep and boundless commitment to family, faith and generosity holds timeless lessons for us all, no matter what journey we find ourselves on. Absorbing, highly-recommended reading.” —Michael J. Fox

“Anyone who knew my treasured friend Edmond Safra was keenly aware that he was a remarkable person: thoughtful, welcoming, intelligent. With this definitive account of his life, a broader audience can marvel at his accomplishments, remember his enduring contributions, and carry forward the lessons of a life lived with purpose and humility.” —Elton John 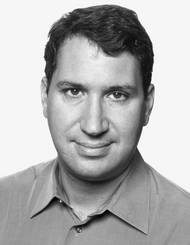 Daniel Gross is one of the most widely-read writers on finance, economics, and business history. Over the past three decades, he has reported from more than 30 countries, covering everything from the dotcom boom and the rise of China to the global financial crisis of 2008-2009. Gross has worked as a reporter at The New Republic and Bloomberg News, wrote the “Economic View” column in The New York Times, and served as Slate’s “Moneybox” columnist. At Newsweek, where he was a columnist and correspondent, he authored seven cover stories. A frequent guest on television and radio, he has contributed to more than 60 publications and is the bestselling author of eight books.