Harvard Book Store is pleased to welcome E.L. DOCTOROW for a discussion of his new novel, Andrew's Brain, in conversation with CHRISTOPHER LYDON.

This brilliant new novel by an American master, the author of Ragtime, The Book of Daniel, Billy Bathgate, and The March, takes us on a radical trip into the mind of a man who, more than once in his life, has been the inadvertent agent of disaster.

Speaking from an unknown place and to an unknown interlocutor, Andrew is thinking, Andrew is talking, Andrew is telling the story of his life, his loves, and the tragedies that have led him to this place and point in time. And as he confesses, peeling back the layers of his strange story, we are led to question what we know about truth and memory, brain and mind, personality and fate, about one another and ourselves. Written with psychological depth and great lyrical precision, this suspenseful and groundbreaking novel delivers a voice for our times—funny, probing, skeptical, mischievous, profound. Andrew’s Brain is a surprising turn and a singular achievement in the canon of a writer whose prose has the power to create its own landscape, and whose great topic, in the words of Don DeLillo, is “the reach of American possibility, in which plain lives take on the cadences of history.”

“E. L. Doctorow is a national treasure, and I mean this in a very specific sense: He has rewarded us, these forty-five years, with a vision of ourselves, as a people, a vision possessed of what I might call ‘aspirationalverve’—he sees us clearly and tenderly, just as we are, but also sees past that—to what we might, at our best, become.”—George Saunders

This event had been rescheduled from February 4 but had to be canceled once again. We apologize for the inconvenience. 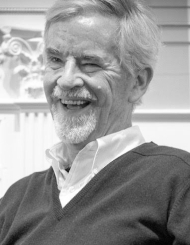 Christopher Lydon is the host since 2005 of Open Source, an online global conversation on arts, ideas and politics. A journalist in many media, he is credited with the original podcast—first radio on the Internet—in 2003. Before that he had reported US presidential politics for the New York Times in the 1970s, hosted public television news in Boston in the 80s, and inaugurated the smartest of public radio conversations, The Connection, a national show based in Boston, in the 90s. Over the last two decades he has recorded conversations in Jamaica, Cuba, Ghana, Tunisia, Egypt, Lebanon, India, Pakistan, Singapore and China. 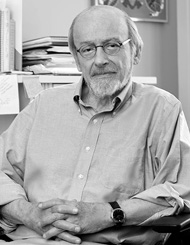 E. L. Doctorow’s works of fiction include Homer & Langley, The March, Billy Bathgate, Ragtime, The Book of Daniel, City of God, Welcome to Hard Times, Loon Lake, World’s Fair, The Waterworks, and All the Time in the World. Among his honors are the National Book Award, three National Book Critics Circle awards, two PEN/Faulkner awards, the Edith Wharton Citation for Fiction, and the presidentially conferred National Humanities Medal. In 2009 he was short-listed for the Man Booker International Prize honoring a writer’s lifetime achievement in fiction, and in 2012 he won the PEN/Saul Bellow Award for Achievement in American Fiction, given to an author whose “scale of achievement over a sustained career [places] him . . . in the highest rank of American literature.” In 2013 the American Academy of Arts and Letters awarded him the Gold Medal for Fiction.