Harvard Book Store and the Episcopal Divinity School are delighted to welcome GENE ROBINSON, Bishop of the Diocese of New Hampshire in the Episcopal Church, for a discussion of his book God Believes in Love: Straight Talk About Gay Marriage.

From the Bishop of the Diocese of New Hampshire in the Episcopal Church, the first openly gay person elected (in 2003) to the historic episcopate and the world's leading religious spokesperson for gay rights and gay marriage—a groundbreaking book that lovingly and persuasively makes the case for same-sex marriage using a commonsense, reasoned, religious argument.

Robinson holds the religious text of the Bible to be holy and sacred and the ensuing two millennia of church history to be relevant to the discussion, and is equally familiar with the secular and political debate going on in America today, and for whom same-sex marriage is a personal issue. Robinson was married to a woman for two decades and is a father of two children and has been married to a man for the last four years of a twenty-three-year relationship.

“My friend, Bishop Gene Robinson, has long been a voice for equality—not with anger or vitriol, but with compassion and faith. He has been guided by the simple precept that we should do unto others as we would have them do unto us.”
—President Barack Obama

“For someone in the eye of the storm buffeting our beloved Anglican Communion, Gene Robinson is so serene; he is not a wild-eyed belligerent campaigner. I was so surprised at his generosity towards those who have denigrated him and worse. Gene Robinson is a wonderful human being, and I am proud to belong to the same church as he.”
—Archbishop Desmond Tutu, Nobel Peace Laureate

About our co-sponsors: Episcopal Divinity School (EDS) is a respected and progressive center for study and spiritual formation for lay and ordained leaders and welcomes students from many denominations. Located on a beautiful campus in Cambridge, Massachusetts, EDS is committed to a mission of social justice and grounded in the Anglican tradition, balancing a respect for the past with an orientation of innovation. 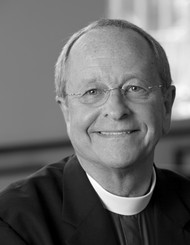 Gene Robinson was born and raised in Lexington, Kentucky, and graduated from the University of the South with a B.A. in American studies and history. He completed the MDiv degree in 1973 at the General Theological Seminary in New York, and was ordained deacon and then priest, serving as curate at Christ Church, Ridgewood, NJ. Robinson is a Senior Fellow at American Progress. He was elected bishop of the Episcopal Diocese of New Hampshire in 2003, having served as Canon to the Ordinary (assistant to the bishop) for nearly eighteen years.

Online ticket sales have now ended, but tickets can still be purchased at Harvard Book Store and by phone at 617-661-1515 until 4pm the day of the event. Remaining tickets will be on sale at the door of the Brattle Theatre when we open doors at about 5:30.

Tickets purchased online are non-refundable and are exchangeable for $5 coupons towards the purchase of a book (valid up to 30 days after the event). Additionally, tickets may only be picked up at the venue the night of the event, and cannot be picked up in-store beforehand. Please note that tickets only guarantee you a seat up until five minutes before the event begins.