Against the Written Word:
Toward a Universal Illiteracy

Harvard Book Store welcomes IAN F. SVENONIUS—rock and roll musician and author—for a discussion of his new book Against the Written Word: Toward a Universal Illiteracy.

About Against the Written Word

Against the Written Word is the most important, most revolutionary book produced since the advent of the printing press; the book that will liberate readers from reading, writers from writing, and booksellers from peddling their despicable wares. This book ushers in a new era of freedom from reading and all its attendant bedfellows such as Enlightenment thinking and the mass alienation wrought by the phonetic alphabet. Against the Written Word will be a tremendous best seller and simultaneously the last book that anyone will read.

With nineteen essays ripping, shredding, tearing apart all the bugaboos that haunt humanity nowadays, Against the Written Word is a must-read for any aspiring radical or would-be gnostic who has a penchant for words, thought, clothes, intoxicants, music, art, expression, etc. The work is presented in a range of writing: essays, screenplays, lectures, sci-fi stories, and manifestos, with topics that include “the rise of incorporated man,” “tourism as the neoliberal mode of military occupation,” a workshop on songwriting for the purpose of suggestion and mind control, and many more.

This handsome, illustrated book will correct the paucity of thought that characterizes the modern bookstore, and will practically sell itself. It will call out from the shelf to ingratiate itself to the unsuspecting everyday book browser, who will be hooked and then hungrily consume it. Infected with a wild-eyed evangelism, they will then proliferate it amongst their friends and acquaintances. These new readers will disseminate it, and so on; soon this slim, innocuous volume will define an epoch and steer thought from here on out.

The bookseller will be surprised and pleased to find that it will be the only book they need to stock. Against the Written Word will be dominant in a manner the market has not seen since the Bible tore up best-seller lists in the Middle Ages or Mao’s Little Red Book wowed the critics in Red China.

Praise for Against the Written Word

"What makes Ian Svenonius funny is a little different. He's funny in his use of language in music, in the ridiculous extended conceits of so many of his songs; he's funny in his prose style, a supercharged Marxist-Leninist jargon placed at the service of deliberate absurdity; he's funny in his presentation as a self-made character, a preaching, yelping, evangelical amalgam of James Brown and the protagonists of Godard's La Chinoise . . . Ian Svenonius' career in comedy has involved various vehicles, but the silly-serious approach is consistent throughout." —Tribune (UK) 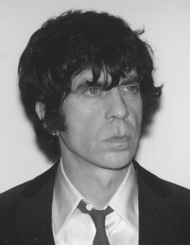 Ian F. Svenonius is the author of the underground best sellers Supernatural Strategies for Making a Rock ’n’ Roll Group, The Psychic Soviet, and Censorship Now!! He was also the host of VBS.tv’s Soft Focus, where he interviewed Mark E. Smith, Genesis P. Orridge, Chan Marshall, Ian MacKaye, and others. As a musician he has created more than twenty albums and countless singles in various rock and roll combos (Escape-ism, Chain & the Gang, The Make-Up, The Nation of Ulysses, etc.). He lives in Los Angeles, CA.