in conversation with HILLARY CHUTE

Harvard Book Store welcomes celebrated cartoonist and educator JAMES STURM for a discussion of his new graphic novel, Off Season. He will be joined in conversation by New York Times Book Review comics and graphic novels columnist HILLARY CHUTE—author of Why Comics? From Underground to Everywhere.

How could this happen? The question of 2016 becomes deeply personal in James Sturm’s riveting graphic novel Off Season, which charts one couple’s divisive separation during Bernie Sanders’s loss to Hillary Clinton, Clinton’s loss to Donald Trump, and the disorienting months that followed.

We see a father navigating life as a single parent and coping with the disintegration of a life-defining relationship. Amid the upheaval lie tender moments with his kids―a sleeping child being carried in from the car, Christmas-morning anticipation, a late-night cookie after a temper tantrum―and fallible humans drenched in palpable feelings of grief, rage, loss, and overwhelming love. Using anthropomorphized characters as a tactic for tempering an otherwise emotionally fraught situation, Off Season is unaffected and raw, steeped in the specificity of its time while speaking to a larger cultural moment.

A truly human experience, Off Season displays Sturm’s masterful pacing and storytelling combined with conscious and confident growth as the celebrated cartoonist and educator moves away from historical fiction to deliver this long-form narrative set in contemporary times. Originally serialized on Slate, this expanded edition turns timely vignettes into a timeless, deeply affecting account of one family and their off season.

"Mr. Sturm knows when to let the images speak for themselves." ―New York Times

"James Sturm's Off Season is a big-hearted meditation on the shifting sands of family and manhood in our uneasy era―I swallowed this book whole and I'll be pressing it on anyone who asks me for a great read this year." ―Emily Bazelon, Cohost of Political Gabfest

"A haunting examination of the inner life of men in the age of Trump. Off Season is the kind of novel we need in this moment, forcing us to confront the personal despair at the heart of our national destiny. I was mesmerized by every image, every word." ―Steve Almond, cohost of Dear Sugars and author of Bad Stories: What the Hell Just Happened to Our Country 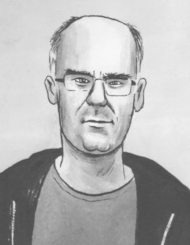 James Sturm lives in Hartland, Vermont, with his wife and two daughters, where he helps run a cartooning school that he co-founded, The Center for Cartoon Studies. He is the author of numerous graphic novels including The Golem’s Mighty Swing, Market Day, and James Sturm’s America.