Poets, witches, booksellers, and rock stars alike all have one thing in common—today, at least—and that is their passion for the work of poet Janaka Stucky. Written over the course of twenty days coming in and out of trance states while secluded in the tower of a 100-year-old church, Janaka’s new book Ascend Ascend is rooted in the Jewish mystical tradition of Hekhalot literature, which chronicles an ascent up the Kabbalistic Tree of Life to witness the “chariot of God.” Equal parts Walt Whitman’s “Song of Myself” and Funkadelic’s “Maggot Brain,” this long poem documents the ecstatic destruction of the self through its union with the divine.

For this very special hometown book launch, Janaka will be presenting his new work in its entirety as an immersive, multidisciplinary performance involving live music to create a visceral interpretation of ritual that invokes mythography across cultural and corporeal boundaries.

"Ascend Ascend is a passionate trance poem of praise, incantation and divination. . . . One is grateful, in these imperiled times, for such forceful ritual and invocation: Every word along the way / Lit like a flame upon / The wick of its origin." —Anne Waldman, author of Trickster Feminism

"Stucky’s writing is a miracle, not only in its genius, but in its generosity. This is a love poem that shocks with secret links and revelations. It will lift you out of whoever you think you are."
—Pam Grossman, host of The Witch Wave podcast 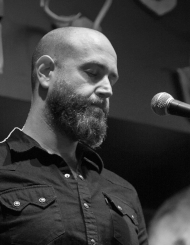 Janaka Stucky is a mystic poet, performer, and founding editor of the award-winning press, Black Ocean. He is the author of The Truth Is We Are Perfect, Your Name Is The Only Freedom, The World Will Deny It For You, and his latest book, Ascend Ascend (Third Man Books, 2019). He has taught and performed in over 60 cities around the world. He is also a two-time National Haiku Champion. More at janakastucky.com.

Tickets are available online only at harvard.com and harvardbookstore.eventbrite.com. All tickets for this event include a $5 coupon for use in the bookstore. Pre-sale tickets include a copy of Ascend Ascend. Books bundled with pre-sale tickets may only be picked up at the venue the night of the event, and cannot be picked up in-store beforehand.