Across cities, towns, and campuses, Americans are grappling with overwhelming challenges and the daily fallout from the most authoritarian White House policies in recent memory.

In an inspiring narrative history, Jeff Biggers reframes today’s battles as a continuum of a vibrant American tradition. Resistance is a chronicle of the courageous resistance movements that have insured the benchmarks of our democracy―movements that served on the front lines of the American Revolution, the defense of the Constitution and Bill of Rights, the defeat of fascism during World War II, and landmark civil rights and environmental protection achievements.

Legendary historian Studs Terkel praised Biggers’s The United States of Appalachia as a "how-to book" in the tradition of the American Revolution. With Resistance, Biggers opens a new window into American history and its meaning today. In a recovery of unsung heroes, including Revolutionary forefather Thomas Paine, Resistance is a provocative reconsideration of the American Revolution, bringing alive early Native American, African American, and immigrant struggles, women’s rights, and environmental justice movements. With lucidity, meticulousness, and wit, Biggers unfolds one of our country’s best-kept secrets: in dealing with the most challenging issues of every generation, resistance to duplicitous civil authority has defined our quintessential American story.

"Resist we must, resist we will―and as this volume powerfully reminds us, in so doing we are acting on the deepest American instincts." ―Bill McKibben, author of Radio Free Vermont: A Fable of Resistance

"Reading this book, I saw history vanquish amnesia, David slay Goliath, and tenacity take down tyrants. I saw a long, unbroken chain of resistance extending back through centuries. I saw the world saved over and over. I saw heroes and declared them my ancestors. I heard stories to inspire bold action. I found traditions I want to pass on.” ―Sandra Steingraber, activist and author of Living Downstream and Raising Elijah

“These times are tumultuous and divisive. But Jeff Biggers, a gifted writer who approaches history as expansively as Zinn and as passionately as Galeano, finds resistance everywhere. He shows us how freedom movements―led by people of color, women, and commoners, from revolutionary-era rebels to today's loud majority―have pulled American democracy away from tyranny and toward humanity time and again. These powerful, urgent essays remind us that everywhere there is resistance there is hope.” ―Jeff Chang, author of We Gon’ Be Alright: Notes on Race and Resegregation

"With compelling and engaging prose, Jeff Biggers lays out the case for Resistance in the age of Trump. Our turbulent times, Biggers shows us, have eerie and chilling parallels to the birth pangs of our nation and to the continuing struggles of 'We the People' to define and claim our voices. At this moment in history, when even the act of listening to the news can cause despair, Biggers gives us hope. In response to our darkness, he reaffirms the light that resistance offers. He shows us that the free expression of resistance, whether with the pen, our marching feet, the taking of a knee before a football game, the words to a song―to name a few―remains a cornerstone of what it means to be American." ―Naomi Benaron, author of Running the Rift 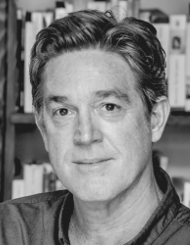 Jeff Biggers is the American Book Award–winning author of several works of history, memoir, journalism, and theater. His previous books include The United States of Appalachia, praised by the Citizen Times as a “masterpiece of popular history”; State Out of the Union, selected by Publishers Weekly as a Top Ten Social Science book in 2012; and Reckoning at Eagle Creek, winner of the Delta Prize for Literature and David Brower Award for Environmental Reporting.