in conversation with CHRISTOPHER LYDEN

Harvard Book Store is delighted to welcome award-winning novelist, essayist, and memoirist JOAN DIDION for a conversation about her most recent memoir, Blue Nights.

Blue Nights opens on July 26, 2010, as Didion thinks back to her daughter Quintana’s wedding in New York seven years before. Today would be her wedding anniversary. This fact triggers vivid snapshots of Quintana’s childhood—in Malibu, in Brentwood, at school in Holmby Hills. Reflecting on her daughter but also on her role as a parent, Didion asks the candid questions any parent might about how she feels she failed either because cues were not taken or perhaps displaced. “How could I have missed what was clearly there to be seen?” Finally, perhaps we all remain unknown to each other. Seamlessly woven in are incidents Didion sees as underscoring her own age, something she finds hard to acknowledge, much less accept.

"Joan Didion, here slightly syncopating in the Bob Dylan manner, has striven with intense dignity and courage in Blue Nights to deepen and extend the effect of The Year of Magical Thinking. . . . In this supremely tender work of memory, Didion is paradoxically insistent that as long as one person is condemned to remember, there can still be pain and loss and anguish." —Christopher Hitchens for Vanity Fair

Please note: Joan Didion will be signing Blue Nights and up to one backlist title per person. 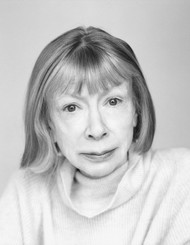 Joan Didion was born in California and lives in New York City. She is the author of five novels and numerous works of nonfiction, including Slouching Toward Bethlehem, The White Album, and Where I Was From. Her previous memoir, The Year of Magical Thinking, was awarded the 2005 National Book Award.

Online ticket sales for this event have ended. Tickets are still available at Harvard Book Store and by phone at 617.661.1515. Tickets purchased online can be picked up at First Parish Church when the doors open, at approximately 6:30pm on Monday, November 7.