in conversation with KELLY LUCE

Harvard Book Store welcomes bestselling author of Wolf in White Van JOHN DARNIELLE—writer, composer, guitarist, and vocalist for the band the Mountain Goats—for a reading from his latest novel, Universal Harvester. Darnielle will be joined in conversation by Pull Me Under author KELLY LUCE.

This event is now sold out, but see below for details on the film screening to follow the event at the Brattle Theatre for another opportunity to see John Darnielle here in Cambridge.

Life in a small town takes a dark turn when mysterious footage begins appearing on VHS cassettes at the local Video Hut.

Jeremy works at the Video Hut in Nevada, Iowa—a small town in the center of the state, the first “a” in Nevada pronounced “ay.” This is the late 1990s, and while the Hollywood Video in Ames poses an existential threat to Video Hut, there are still regular customers, a rush in the late afternoon. It’s good enough for Jeremy: It’s a job, quiet and predictable, and it gets him out of the house, where he lives with his dad and where they both try to avoid missing Mom, who died six years ago in a car wreck.

But when a local schoolteacher comes in to return her copy of Targets—an old movie, starring Boris Karloff, one Jeremy himself had ordered for the store—she has an odd complaint: “There’s something on it,” she says, but doesn’t elaborate. Two days later, a different customer returns She’s All That, a new release, and complains that there’s something wrong with it: “There’s another movie on this tape.”

Jeremy doesn’t want to be curious. But he takes a look and, indeed, in the middle of the movie the screen blinks dark for a moment and She’s All That is replaced by a black-and-white scene, shot in a barn, with only the faint sounds of someone breathing. Four minutes later, She’s All That is back. But there is something profoundly unsettling about that scene; Jeremy’s compelled to watch it three or four times. The scenes recorded onto Targets are similar, undoubtedly created by the same hand. Creepy. And the barn looks much like a barn just outside of town.There will be no ignoring the disturbing scenes on the videos. And all of a sudden, what had once been the placid, regular old Iowa fields and farmhouses now feels haunted and threatening, imbued with loss and instability and profound foreboding. For Jeremy, and all those around him, life will never be the same . . .

The Brattle Theatre will screen Peter Bogdanovich's Targets—featured prominently in Universal Harvester—after our event and signing with the author. This screening will be ticketed separately, through the Brattle Theatre, and will feature a special introduction by John Darnielle. Early arrivers to the screening will have the opportunity to purchase copies of the book and get them signed. 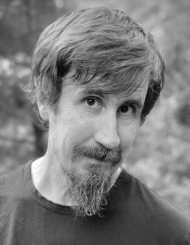 John Darnielle’s first novel, Wolf in White Van, was a New York Times bestseller, National Book Award nominee, and a finalist for the Los Angeles Times Book Prize for first fiction; his second, Universal Harvester, was also a New York Times bestseller and was a finalist for a Locus Award. He is the writer, composer, guitarist, and vocalist for the band the Mountain Goats. He lives in Durham, North Carolina, with his wife and sons.