About The Milk Hours

“We lived overlooking the walls overlooking the cemetery.” So begins the title poem of this collection, whose recursive temporality is filled with living, grieving things, punctuated by an unseen world of roots, bodies, and concealed histories. Like a cemetery, too, The Milk Hours sets unlikely neighbors alongside each other: Hegel and Murakami, Melville and the Persian astronomer al-Sufi, enacting a transhistorical poetics even as it brims with intimacy. These are poems of frequent swerves and transformations, which never stray far from an engagement with science, geography, art, and aesthetics, nor from the dream logic that motivates their incessant investigations.

Indeed, while John James begins with the biographical―the haunting loss of a father in childhood, the exhausted hours of early fatherhood―the questions that emerge from his poetic synthesis are both timely and universal: what is it to be human in an era where nature and culture have fused? To live in a time of political and environmental upheaval, of both personal and public loss? How do we make meaning, and to whom―or what―do we turn, when such boundaries so radically collapse?

Praise for The Milk Hours

“‘Home is a question,’ writes John James in The Milk Hours, a remarkable debut in which sorrow leads to an astonishing intimacy with the world. The speaker is pensive but inquisitive, bewildered by the loss of a father and renewed by love and parenthood. Art, science, and travel, like mortality, become tethers to the elegant and chaotic truths of our world. The Milk Hours is a moving and urgently crafted testament to resilience and to beauty.” ―Eduardo C. Corral

“The titular poem in John James’s debut collection refers not only to the luminous hour of infant nurture, although that is its occasion, but to the violent loss of his father, an event distant enough that ‘snowmelt smoothes the stone cuts of his name.’ James’s searing attention is upon the fleeting, the untethered, upon fecundity and decay, the cosmic and the molecular. These are also the poems of a young father’s daily life in the wane of empire, who wishes ‘to remember things purely, to see them / As they are,’ and who recognizes in what he sees our peril. ‘The end,’ he writes, ‘we’re moving toward it.’ James is, then, a poet of our precarious moment, and The Milk Hours is his gift to us." ―Carolyn Forché

“The poetry of the earth is intensely alive in the poems of John James. In this luminous first book, there are poems of a son and a young father. Many of the best inhabit a tormented Kentucky landscape where there is a field with horses, a house and a barn, a flooding river, a cemetery where a parent lies, and bees or flies hovering. Out of the sorrowful fragments of personal history, John James has a created a book of unusual intelligence and beauty."
―Henri Cole 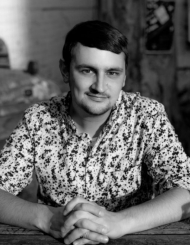 John James is the author of The Milk Hours, selected by Henri Cole for the Max Ritvo Poetry Prize (Milkweed, 2019). His poems appear in Boston Review, Kenyon Review, Gulf Coast, Poetry Northwest, Best American Poetry 2017, and elsewhere, and his work has been supported by the Bread Loaf Environmental Writers Conference, the Academy of American Poets, and Georgetown University's Lannan Center for Poetics and Social Practice. He lives in the San Francisco Bay Area, where he is pursuing a PhD in English at the University of California, Berkeley.