in conversation with JOSEPH NUGENT

Dark Lies the Island is a collection of unpredictable stories about love and cruelty, crimes, desperation, and hope from the man Irvine Welsh has described as 'the most arresting and original writer to emerge from these islands in years'. Every page is shot through with the riotous humour, sympathy and blistering language that mark Kevin Barry as a pure entertainer and a unique teller of tales.

"There are a lot of pleasures to be had in Barry's short story collection. First, there's his way with language—a bent form of Irish that makes the most mundane language, like those of the mileage-obsessed locals at the hotel bar in "Fjord of Killary," somehow hilarious. Then there's the pleasure of safely spending time in the company of people you might well cross the street to avoid. . . . the island and its inhabitants aren't doing well, and Barry is a master at showing both the darkness and the piercing moments of humor and self-knowledge that now and then penetrate it."—Publishers Weekly

"The writing is spectacular, alternately stately and hurried, occasionally clipped but never languid, steeped in the vernacular but never lacking precision, and very often pulsing with the rhythm of iambic pentameter. Smashing, compulsively readable stuff: Barry will be a household name, and soon."—Booklist

Josph Nugent is a professor of english at Boston College. His teachings and research engage with Ireland about the turn of the twentieth century. Writing within the confluence of Joyce Studies, Sensory Studies, Urban Studies, and technology, his recent work relates transformations in the sense of smell to the embourgeoisement of nineteenth-century Ireland.  His writings have appeared in Victorian Studies, The Senses and Society, and Éire-Ireland. He teaches courses on Joyce, modernism, and in the Irish language. He is currently developing Walking Ulysses <www.ulysses.bc.edu> a downloadable smartphone app guide to Joyce’s Dublin. His particular involvement in James Joyce is also reflected in Raidin the Wake, his “Finnegans Wake” reading group, and in the Boston Joyce Forum. 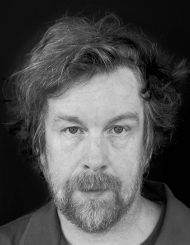 Kevin Barry is the author of the novels Night Boat to Tangier, Beatlebone, and City of Bohane and the story collections Dark Lies the Island and There Are Little Kingdoms. His awards include the IMPAC Dublin Literary Award, the Goldsmiths Prize, the Sunday Times EFG Short Story Prize and the Lannan Foundation Literary Award. His stories and essays appear in the New Yorker, Granta and elsewhere. He also works as a playwright and screenwriter, and he lives in County Sligo, Ireland.