The Witches Are Coming

Harvard Book Store is thrilled to welcome LINDY WEST—critically acclaimed New York Times columnist and author of Shrill—for a reading from her latest book, The Witches Are Coming. This event is co-sponsored by Pop Culture Positive.

About The Witches Are Coming

THIS IS A WITCH HUNT.
WE'RE WITCHES,
AND WE'RE HUNTING YOU.

From the moment powerful men started falling to the #MeToo movement, the lamentations began: this is feminism gone too far, this is injustice, this is a witch hunt. In The Witches Are Coming, firebrand author of the New York Times bestselling memoir and now critically acclaimed Hulu TV series Shrill, Lindy West, turns that refrain on its head. You think this is a witch hunt? Fine. You've got one.

In a laugh-out-loud, incisive cultural critique, West extolls the world-changing magic of truth, urging readers to reckon with dark lies in the heart of the American mythos, and unpacking the complicated, and sometimes tragic, politics of not being a white man in the twenty-first century. She tracks the misogyny and propaganda hidden (or not so hidden) in the media she and her peers devoured growing up, a buffet of distortions, delusions, prejudice, and outright bullsh*t that has allowed white male mediocrity to maintain a death grip on American culture and politics—and that delivered us to this precarious, disorienting moment in history.

West writes, "We were just a hair's breadth from electing America's first female president to succeed America's first black president. We weren't done, but we were doing it. And then, true to form—like the Balrog's whip catching Gandalf by his little gray bootie, like the husband in a Lifetime movie hissing, 'If I can't have you, no one can'—white American voters shoved an incompetent, racist con man into the White House."

We cannot understand how we got here—how the land of the free became Trump's America—without examining the chasm between who we are and who we think we are, without fact-checking the stories we tell ourselves about ourselves and each other. The truth can transform us; there is witchcraft in it. Lindy West turns on the light.

Praise for The Witches Are Coming

"In this time of great frustration, this collection is a clearing in the woods to meet, to reflect, to dance, and to cackle around the fire." ―Abbi Jacobson, creator of Broad City and New York Times bestselling author of I Might Regret This

"GET ME A BROOM." ―Samantha Irby, New York Times bestselling author of We Are Never Meeting in Real Life

"One of our foremost thinkers on gender unveils her unifying theory of America: that our steady diet of pop culture created by and for embittered, entitled white men has stoked our sociopolitical moment. Adam Sandler, South Park, and Pepe the Frog all come under West's withering scrutiny in this funny, hyper-literate analysis of the link between meme culture and male mediocrity." ―Esquire.com 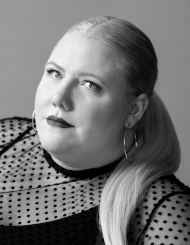 Lindy West is a contributing opinion writer for the New York Times. She is the author of Shrill, a memoir, which has been adapted into a Hulu series starring Aidy Bryant. Her essays on feminism, social justice, body image and popular culture have been featured in Jezebel, Cosmopolitan, GQ, and on This American Life. From 2014 to 2017 she wrote a weekly political column for The Guardian. She is also the founder of I Believe You/It's Not Your Fault, an advice blog for teenagers, as well as the reproductive rights de-stigmatization campaign #ShoutYourAbortion. She lives in Seattle, Washington.

Tickets are available online only at harvard.com and harvardbookstore.eventbrite.com. All tickets include a copy of The Witches Are Coming. Books bundled with tickets may only be picked up at the venue the night of the event, and cannot be picked up in-store beforehand.

Pop Culture Positive was founded in 2018, with the intent to provide a bold, interactive publication for women focused on replacing the ideal body image with self-love and acceptance. Through events and partnerships with contributing writers, influencers, brands and non-profit organizations, PopPos aims to build a network of powerful resources for women who want to be supported in their journey to self-love and expression. Learn more here.