The Shadow King:
A Novel

About The Shadow King

With the threat of Mussolini’s army looming, recently orphaned Hirut struggles to adapt to her new life as a maid in Kidane and his wife Aster’s household. Kidane, an officer in Emperor Haile Selassie’s army, rushes to mobilize his strongest men before the Italians invade. His initial kindness to Hirut shifts into a flinty cruelty when she resists his advances, and Hirut finds herself tumbling into a new world of thefts and violations, of betrayals and overwhelming rage. Meanwhile, Mussolini’s technologically advanced army prepares for an easy victory. Hundreds of thousands of Italians―Jewish photographer Ettore among them―march on Ethiopia seeking adventure.

As the war begins in earnest, Hirut, Aster, and the other women long to do more than care for the wounded and bury the dead. When Emperor Haile Selassie goes into exile and Ethiopia quickly loses hope, it is Hirut who offers a plan to maintain morale. She helps disguise a gentle peasant as the emperor and soon becomes his guard, inspiring other women to take up arms against the Italians. But how could she have predicted her own personal war as a prisoner of one of Italy’s most vicious officers, who will force her to pose before Ettore’s camera?

What follows is a gorgeously crafted and unputdownable exploration of female power, with Hirut as the fierce, original, and brilliant voice at its heart. In incandescent, lyrical prose, Maaza Mengiste breathes life into complicated characters on both sides of the battle line, shaping a heartrending, indelible exploration of what it means to be a woman at war.

Praise for The Shadow King

“The Shadow King is a beautiful and devastating work; of women holding together a world ripping itself apart. They will slip into your dreams and overtake your memories.” —Marlon James, author of Black Leopard, Red Wolf

“With epic sweep and dignity, Mengiste has lifted this struggle into legend, along with the women who fought in it. Beautiful, horrifying, elegant, and haunted, The Shadow King is a modern classic.” —Andrew Sean Greer, Pulitzer Prize–winning author of Less

“One of the most affecting accounts of the terror of war I have ever read, all the more so for the being cloaked in the language of beauty, such that the words and their meaning burn through the senses. The Shadow King is a work borne of rage, a rage made magnificent for its compassion and the story it tells us―that in war there are no winners.” —Aminatta Forna, author of Happiness 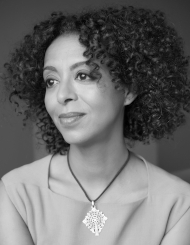 Maaza Mengiste is the author of The Shadow King, shortlisted for the 2020 Booker Prize, and a recipient of the American Academy of Arts & Letters Award in Literature, as well as a LA Times Books Prize finalist. It was named a Best Book of 2019 by New York Times, NPR, Time, Elle, and other publications. Beneath the Lion's Gaze, her debut, was selected by the Guardian as one of the 10 best contemporary African books.