Meb for Mortals:
How to Run, Think and Eat Like a Champion Marathoner

Harvard Book Store and Runner's World welcome Skechers Performance elite athlete MEB KEFLEZIGHI, winner of the 2014 Boston Marathon, 2009 New York City Marathon, Olympic Silver Medalist, and founder of the MEB Foundation, for a discussion of his book Meb for Mortals: How to Run, Think and Eat like a Champion Marathoner. The evening will be hosted by Runner’s World Editor-in-Chief DAVID WILLEY, who will be joined on the panel by 1968 Boston Marathon champion and long-time Runner’s World editor AMBY BURFOOT, TCS New York City Marathon Race Director MARY WITTENBERG, and Meb for Mortals co-author SCOTT DOUGLAS.

With his historic win at the 2014 Boston Marathon, Meb Keflezighi cemented his legacy as one of the great champions of long-distance running. Runners everywhere wanted to know how someone two weeks away from his 39th birthday, who had only the 15th best time going into the race, could defeat the best field in Boston Marathon history and become the first American man to win the race in 31 years.

Meb For Mortals describes in unprecedented detail how three-time Olympian Keflezighi prepares to take on the best runners in the world. More important, the book shows everyday runners how to implement the training, nutritional, and mental principles that have guided him throughout his long career, which in addition to this year's Boston win includes an Olympic silver medal and the 2009 New York City Marathon title.

Tickets can purchased online at meb.eventbrite.com.

Meb Keflezighi, author of Meb for Mortals and founder of the MEB Foundation, winner of the 2014 Boston Marathon and 2009 NYC Marathon, 2004 Olympic Marathon Silver Medalist, three-time US Olympian and three-time US Cross Country national champion.

Scott Douglas, co-author of Meb for Mortals, is a senior content editor at Runner’s World and has authored or co-authored six previous books on running.

This event will not include a book signing. Books included with tickets will come with pre-signed book plates.

The first one-hundred tickets sold will each include a voucher for a free pair of shoes from Skechers Performance Division. One voucher per person. Winners will be notified via e-mail. The voucher may only be redeemed by the ticket purchaser and is non-transferable. 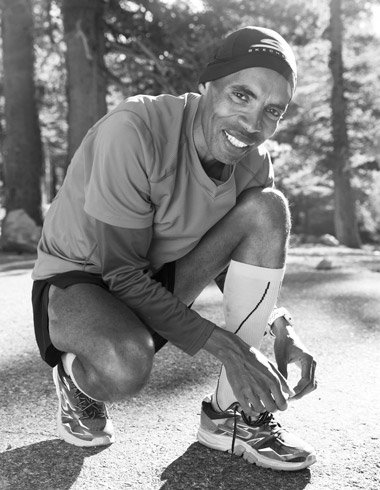 Meb Keflezighi's victory at the 2014 Boston Marathon made him the first American man to win the race in 31 years. He's won more than a dozen national titles and is a three-time US Olympian. Meb is also the founder of the MEB Foundation, which funds programs that promote fitness and other positive lifestyle choices for children. He lives in San Diego, CA.

In store ticket sales will end at 2pm. Tickets will be available for purchase at the door of the Old South Church starting at 6:15pm.

Please note that your ticket ONLY guarantees you admission until five minutes before an event begins. Additionally, tickets (and included books) purchased online may only be picked up at the venue the night of the event, and cannot be picked up in-store beforehand. Vouchers expire one month after the event.