Harvard Book Store is delighted to welcome bestselling novelist MYLA GOLDBERG for a reading from The False Friend, her most recent novel, newly out in paperback.

Leaders of a mercurial clique of girls, Celia and Djuna reigned mercilessly over their three followers. One after­noon, they decided to walk home along a forbidden road. Djuna disappeared, and for twenty years Celia blocked out how it happened.

The lie Celia told to conceal her misdeed became the accepted truth: everyone assumed Djuna had been abducted, though neither she nor her abductor was ever found. Celia’s unconscious avoidance of this has meant that while she and her longtime boyfriend, Huck, are professionally successful, they’ve been unable to move forward, their relationship falling into a rut that threatens to bury them both.

Celia returns to her hometown to confess the truth, but her family and childhood friends don’t believe her. Huck wants to be supportive, but his love can’t blind him to all that contra­dicts Celia’s version of the past.

"[The False Friend] is a compelling exploration of the fallibility of memory, explored through richly drawn characters, none more so than Goldberg's struggling protagonist, Celia."
—The San Francisco Chronicle 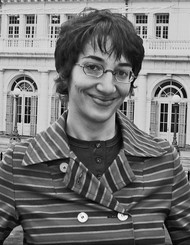 Myla Goldberg is the author of the bestselling Bee Season, which was named a New York Times Notable Book in 2000 and made into a film, and, most recently, of Time's Magpie, a book of essays about Prague. Her short stories have appeared in Harper's and McSweeney's and on Failbetter.com. She lives in Brooklyn, New York.