Ways to Spend the Night

About Ways to Spend the Night

Clare and her oldest friend from college had been planning this visit for the past three months. But only yesterday, her arms full of towels and pillows, Clare realized that it was too soon for her husband's study to become a guest room. First she needed to talk through her anguish and anger at finding him there, slumped over his desk beside the empty vials of pills, finding his folded note that said "Clare."

A widower finds his stolen car and begins a relationship with the thief; a woman whose sisters levy accusations against their dying father wonders why he chose them, not her; a divorcing couple celebrates a final beach weekend with their closest friends.

In fifteen stories of loss and recovery, including two Pushcart Prize winners, Pamela Painter cements her status as a master of the contemporary story.

Recalling both the excess of The Wolf of Wall Street, and the drifting narrator of A Single Man, Ioannis Pappos’s debut novel is a portrait of privilege, aspiration, and international finance during the wayward course of the American economy between 9/11 and the 2008 Financial collapse, and is filled with surprisingly tender observations about identity, loneliness, and human connection.

“I’m homeless, but in First Class.”

Stathis Rakis abandoned his small Greek village for a more worldly life, first in San Francisco, where the Dot Com Bubble had already burst, and then in Paris, France, where he is pursuing an MBA at an elite business school. After falling helplessly in love with a liberal New England journalist with a good conscience, who comes to campus with some scores to settle, Stathis moves to the United States to begin as a consultant for a company called Command. He spends the very few hours of the day that aren’t consumed by work draining the minibar, battling insomnia, and binging on more than room service. Luxury is a given, happiness is not.

As the economy recovers and a new bubble expands in a post-9/11 world, Stathis drifts upward, baring witness to the criminal decadence that will become the 2008 financial crisis, as well as his new habits of indulgence—drugs, sex, and insider trading. In a world of insiders--from corporate suits to Hollywood celebutantes—Stathis remains the outsider: too foreign to be one of them, too cynical to turn back. 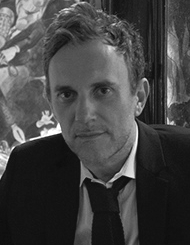 Ioannis Pappos is a management consultant and writer from Pelio, Greece. A graduate of Stanford and the INSEAD Business School, he lives in New York City. Hotel Living is his first novel.