Out of Darkness, Shining Light:
A Novel

Harvard Book Store welcomes PETINA GAPPAH—the award-winning, widely translated author of The Book of Memory and Rotten Row—for a discussion of her latest novel, Out of Darkness, Shining Light.

About Out of Darkness, Shining Light

“This is how we carried out of Africa the poor broken body of Bwana Daudi, the Doctor, David Livingstone, so that he could be borne across the sea and buried in his own land.”

So begins Petina Gappah's powerful novel of exploration and adventure in nineteenth-century Africa—the captivating story of the loyal men and women who carried explorer and missionary Dr. Livingstone's body, his papers and maps, fifteen hundred miles across the continent of Africa, so his remains could be returned home to England and his work preserved there.

Narrated by Halima, the doctor's sharp-tongued cook, and Jacob Wainwright, a rigidly pious freed slave, this is a story that encompasses all of the hypocrisy of slavery and colonization—the hypocrisy at the core of the human heart—while celebrating resilience, loyalty, and love.

Praise for Out of Darkness, Shining Light

“Engrossing, beautiful, and deeply imaginative, Out of Darkness, Shining Light is a novel that lends voice to those who appeared only as footnotes in history, yet whose final, brave act of loyalty and respect changed the course of it. An incredible and important book by a masterful writer.” ​—Yaa Gyasi, author of Homegoing

“Mixing painstaking research with a formidable imagination, Petina Gappah resurrects the brave, misguided, heroic, and ill-starred party who hauled the dried-up corpse of Dr. David Livingstone across 1,000 miles of African interior to the Indian Ocean. Her narrators, a hilarious cook named Halima and a sanctimonious Christian named Jacob, cut a swath through a continent at the crossroads of colonization, superstition, religion and slavery, illuminating the contradictions inherent in every life. This is a beautiful novel.” —Anthony Doerr, author of All the Light We Cannot See

“Petina Gappah’s Out of Darkness, Shining Light describes a world on the cusp of change.  Her narrators, Halima and Jacob, both former slaves—along with a cohort of sixty-some Africans and Arabs—carry a dead muzungu (white person) for nine months across impossible 19th-century African terrain. While they ultimately reach their destination, delivering a wizened body to the awaiting arms of their future colonizers, the greater catastrophe is still to come. Petina Gappah knows what she writes; her historical and cultural insights add texture and veracity to every page. A powerful novel, beautifully told, Out of Darkness, Shining Light reveals as much about the present circumstances as the past that helped create them.” —Jesmyn Ward, author of Sing, Unburied, Sing 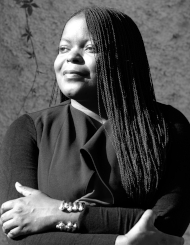 Petina Gappah is an international lawyer and writer who was born in Kitwe, Zambia and raised in Zimbabwe. She is the author of An Elegy for Easterly, The Book of Memory, and Rotten Row. Her work has been shortlisted for, among others, the Orwell Prize, The Los Angeles Times Book Award, and the PEN America Open Book Award. Having spent more than a decade working as an international trade lawyer in Geneva, Gappah now divides her time between Harare and Berlin.