A Beginner's Guide to Japan:
Observations and Provocations

Harvard Book Store and the Japan Society of Boston welcome acclaimed author and travel writer PICO IYER for a discussion of his latest books, A Beginner's Guide to Japan: Observations and Provocations and Autumn Light: Season of Fire and Farewells.

About A Beginner's Guide to Japan

After thirty-two years in Japan, Pico Iyer can use everything from anime to Oscar Wilde to show how his adopted home is both hauntingly familiar and the strangest place on earth. "Arguably the world's greatest living travel writer" (Outside), he draws on readings, reflections, and conversations with Japanese friends to illuminate an unknown place for newcomers, and to give longtime residents a look at their home through fresh eyes.

A Beginner's Guide to Japan is a playful and profound guidebook full of surprising, brief, incisive glimpses into Japanese culture. Iyer's adventures and observations as he travels from a meditation-hall to a love-hotel, from West Point to Kyoto Station, make for a constantly surprising series of provocations guaranteed to pique the interest and curiosity of those who don't know Japan, and to remind those who do of the wide range of fascinations the country and culture contain.

For years, Pico Iyer has split his time between California and Nara, Japan, where he and his Japanese wife, Hiroko, have a small home. But when his father-in-law dies suddenly, calling him back to Japan earlier than expected, Iyer begins to grapple with the question we all have to live with: how to hold on to the things we love, even though we know that we and they are dying. In a country whose calendar is marked with occasions honoring the dead, this question is more urgent than anywhere else.

Iyer leads us through the year following his father-in-law's death, introducing us to the people who populate his days: his ailing mother-in-law, who often forgets that her husband has died; his absent brother-in-law, who severed ties with his family years ago but to whom Hiroko still writes letters; and the men and women in his ping-pong club, who, many years his senior, traverse their autumn years in different ways. And as the maple leaves begin to redden and the heat begins to soften, Iyer offers us a singular view of Japan, in the season that reminds us to take nothing for granted.

Praise for A Beginner's Guide to Japan

“What holds everything together, besides Iyer’s elegantly smooth prose style and gift for detailed observation, is a circling around the theme of autumn in Japan and this autumnal period in his life . . . This season teaches him the lesson of impermanence, the inevitability of decay and ‘how to hold on to the things we love even though we know that we and they are dying’ . . . There’s much wisdom in what he says” —The New York Times Book Review

“Profound . . . Iyer’s writing is both simple and lyrical. . . The memoir succeeds, with its deceptively quiet descriptions of autumn both in the natural world, and in the season of his and Hiroko’s own lives, in echoing a uniquely Japanese appreciation of the fleeting nature of time, as well as the humbling acceptance that nothing lasts.” —New York Journal of Books

“The beauty of its prose and the quality of its insight, this gentle, reflective reminiscence reveals again Iyer's literary virtuosity. . . Much of what makes Autumn Light so enchanting is the effortless way Iyer extracts meaning from life's quotidian details . . . Arresting . . . he reveals fundamental truths in an unobtrusively aphoristic style . . . An ideal volume to read and read again for both pleasure and wisdom.” —Shelf Awareness 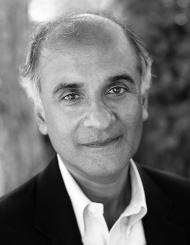 Pico Iyer is the author of eight works of nonfiction and two novels. A writer for Time since 1982, he is a frequent contributor to the New York Times, Harper's, the New York Review of Books, the Los Angeles Times, the Financial Times, and many other magazines and newspapers on both sides of the Atlantic and Pacific. He splits his time between Nara, Japan, and the United States.

Co-Sponsored by Japan Society of Boston

Founded in 1904, the Japan Society of Boston aims to promote active interchanges between Japanese and Americans for mutual understanding, benefit, and enjoyment. We foster a network of individuals, institutions, and businesses, which are connected by a strong interest in Japan and a shared recognition of the importance of the U.S.–Japan relationship.