Harvard Book Store welcomes award-winning author, scholar, and activist PREMILLA NADASEN for a discussion of her latest book, Household Workers Unite: The Untold Story of African American Women Who Built a Movement. In this new book she tells the stories of African American domestic workers—resurrecting a little-known history of domestic worker activism in the 1960s and 1970s, and offering new perspectives on race, labor, feminism, and organizing.

In this groundbreaking history of African American domestic-worker organizing, Premilla Nadasen shatters countless myths and misconceptions about an historically misunderstood workforce. Resurrecting a little-known history of domestic-worker activism from the 1950s to the 1970s, Nadasen shows how these women were a far cry from the stereotyped passive and powerless victims; they were innovative labor organizers who tirelessly organized on buses and streets across the United States to bring dignity and legal recognition to their occupation.

Dismissed by mainstream labor as “unorganizable,” African American household workers developed unique strategies for social change and formed unprecedented alliances with activists in both the women’s rights and the black freedom movements. Using storytelling as a form of activism and as means of establishing a collective identity as workers, these women proudly declared, “We refuse to be your mammies, nannies, aunties, uncles, girls, handmaidens any longer.”

With compelling personal stories of the leaders and participants on the front lines, Household Workers Unite gives voice to the poor women of color whose dedicated struggle for higher wages, better working conditions, and respect on the job created a sustained political movement that endures today.

“Here at last is the story that finally positions black domestic workers at the center of mid-twentieth-century civil rights and anti-racist movement history. In the process of fighting for their rights as citizen-workers, the women whose phenomenal lives are explored in Household Workers Unite forged a legacy that deeply informs our social justice struggles today.” —Angela Davis, Distinguished Professor Emerita, History of Consciousness and Feminist Studies, University of California, Santa Cruz

“As the ugliness of racism today wrenches our hearts, rendering a feeling of helplessness, it is restorative to learn about the empowering leadership of black women domestic workers and civil rights activists who have helped change laws and policies—and to whom we are all indebted.” —Sheila Bapat, Feministing 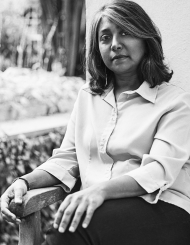 Premilla Nadasen is an associate professor of history at Barnard College, Columbia University, and is the author of several books, including the award-winning Welfare Warriors: The Welfare Rights Movement in the United States. A longtime scholar-activist, Nadasen works closely with domestic workers’ rights organizations, for which she has written policy briefs and served as an expert academic witness. She also writes about household labor, social movements, and women’s history for Ms., the Progressive Media Project, and other media outlets.