Harvard Book Store is very pleased to welcome Harvard PhD and prizewinning novelist TAHMIMA ANAM for a reading from her newest work of fiction, The Good Muslim.

In the dying days of a brutal civil war, Sohail Haque stumbles upon an abandoned building. Inside he finds a young woman whose story will haunt him for a lifetime to come. . . . Almost a decade later, Sohail's sister, Maya, returns home after a long absence to find her beloved brother transformed. While Maya has stuck to her revolutionary ideals, Sohail has shunned his old life to become a charismatic religious leader. And when Sohail decides to send his son to a madrasa, the conflict between brother and sister comes to a devastating climax.

"[Anam's] debut, A Golden Age [was] set during the turmoil of Bangladesh's 1971 war of independence. The Good Muslim, set in the aftermath of that conflict, is a devastating account of two siblings, Maya and Sohail, negotiating life in a new nation haunted both by the past and by chilling presentiments of the future. . . . All this may make The Good Muslim sound heavy—but it isn't. Its clarity, alacrity, and succession of brief, vivid scenes give the characters room to breathe. Maya is immediately impressive but Anam's acuity cuts deepest in her treatment of Sohail. In this young man, nationalism, machismo, conservatism, and denial mix to create a tragic archetype. His fervour is a crutch for his trauma, guilt, and grief, his certainty built on shaky foundations." —The Guardian (UK)

"This second novel liberates its author from the mighty shadow cast by the success of her first, A Golden Age. Tahmima Anam's achievement are many in The Good Muslim, but the biggest, in some ways, is that she manages to make the 'difficult second album' look easy. This is a quietly confident novel that shows no strain of critical expectation, and all the narrative and poetic skill of her debut." —The Independent (UK) 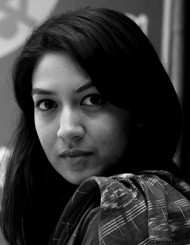 Tahmima Anam was born in Dhaka, Bangladesh, and grew up in Paris, Bangkok, and New York. She holds a PhD in social anthropology from Harvard University. Her writing has been published in Granta, the New York Times, the Guardian, and the Financial Times. A Golden Age, her first novel, was the winner of the Commonwealth Writers' Prize for Best First Book. She lives in London and Dhaka.