Gene Machine:
The Race to Decipher the Secrets of the Ribosome

The Harvard University Division of Science, Cabot Science Library, and Harvard Book Store welcome Nobel Prize-winning biologist and president of the Royal Society VENKI RAMAKRISHNAN for a discussion of his latest book, Gene Machine: The Race to Decipher the Secrets of the Ribosome.

Everyone has heard of DNA. But by itself, DNA is just an inert blueprint for life. It is the ribosome—an enormous molecular machine made up of a million atoms—that makes DNA come to life, turning our genetic code into proteins and therefore into us. Gene Machine is a gripping account of the race to map the structure of the ribosome, a fundamental discovery that both advances our knowledge of all life and could lead to the development of better antibiotics against life-threatening diseases. It is also a human story of Ramakrishnan’s unlikely journey, from his first fumbling experiments in a biology lab to being the dark horse in a fierce competition with some of the world’s best scientists. In the end, Gene Machine is a frank insider’s account of the pursuit of high-stakes science.

"Ramakrishnan's writing is so honest, lucid and engaging that I could not put this book down until I had read to the very end." —Siddhartha Mukherjee, author of The Emperor of All Maladies and The Gene

"If someone had told me that one of the most witty and enthralling books I'd read this year would be on the quest to understand ribosomes, I believe I would have laughed in his face, but I would have been quite wrong. Gene Machine is beyond superb." ―Bill Bryson

"The ribosome is the central processor that decodes the universal machine-code of life, and the history of its unravelling is on a par with that of DNA itself. You could think of Venki Ramakrishnan as a sort of 'nice Jim Watson.' His meticulously detailed and generous memoir has the same disarming frankness as The Double Helix. His personal honesty about the competitive ambition that drove him is tempered by his deeply thoughtful reflections on the potentially corrupting effect of big prizes. Gene Machine will be read and re-read as an important document in the history of science." ―Richard Dawkins 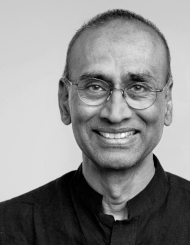 Venkatraman ‘Venki’ Ramakrishnan is a Nobel Prize-winning biologist whose many scientific contributions include his work on the atomic structure of the ribosome. Venki received the Nobel Prize in Chemistry for his work on ribosomal structure and was knighted in 2012. He is a Member of the US National Academy of Sciences, Leopoldina and EMBO, and a Foreign Member of the Indian National Science Academy. He is a senior scientist at the MRC Laboratory of Molecular Biology in Cambridge, UK. In 2015, he was elected as President of the Royal Society for a five-year term.


The Harvard University Science Center is Harvard's main classroom and laboratory building for undergraduate science and mathematics, in addition to housing numerous other facilities and services. Learn more here.