Boyz n the Void:
a mixtape to my brother

in conversation with SABRINA ALLI

Harvard Book Store's virtual event series welcomes G'RA ASIM—assistant professor of nonfiction writing at Ithaca College and the singer and bass player for the acclaimed punk band babygotbacktalk—for a discussion of his book Boyz n the Void: a mixtape to my brother. He will be joined in conversation by celebrated writer and educator SABRINA ALLI.

While payment is not required, we are suggesting a $5 contribution to support this author series, our staff, and the future of Harvard Book Store—a locally owned, independently run Cambridge institution. In addition, by purchasing a copy of Boyz n the Void on harvard.com, you support indie bookselling and the writing community during this difficult time.

About Boyz n the Void

How does one approach Blackness, masculinity, otherness, and the perils of young adulthood? For G’Ra Asim, punk music offers an outlet to express himself freely. As his younger brother, Gyasi, grapples with finding his footing in the world, G’Ra gifts him with a survival guide for tackling the sometimes treacherous cultural terrain particular to being young, Black, brainy, and weird in the form of a mixtape.

Boyz n the Void: a mixtape to my brother blends music and cultural criticism and personal essay to explore race, gender, class, and sexuality as they pertain to punk rock and straight edge culture. Using totemic punk rock songs on a mixtape to anchor each chapter, the book documents an intergenerational conversation between a Millennial in his 30s and his zoomer teenage brother. Author, punk musician, and straight edge kid, G’Ra Asim weaves together memoir and cultural commentary, diving into the depths of everything from theory to comic strips, to poetry to pizza commercials to mapping the predicament of the Black creative intellectual.

With each chapter dedicated to a particular song and placed within the context of a fraternal bond, Asim presents his brother with a roadmap to self-actualization in the form of a Doc Martened foot to the behind and a sweaty, circle-pit-side-armed hug.

Praise for Boyz n the Void

“Like any great mixtape, Asim’s compilation is the most personalized of gifts. . . . Written with love, erudition, and the utmost respect, Boyz n the Void is a genuine keepsake.” —Paul Beatty, author of The Sellout

“A spellbinding odyssey and a magnificent debut for an exciting young author and thinker.” —Kimberlé Williams Crenshaw, cofounder and executive director of the African American Policy Forum

“A critical ethnography of growing up black and punk in the aughts. Asim strikes a balance between total immersion in the scene and the intimacy of a letter sent between brothers. . . . Boyz n the Void is essential reading for black weirdos, punks of all ages, and those invested in impeccably rendered American history.” —Cyrée Jarelle Johnson, author of Slingshot 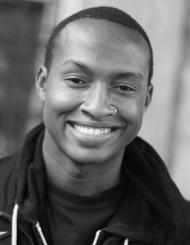 G’Ra Asim, a writer and musician, is an assistant professor of nonfiction writing at Ithaca College. His work has appeared in Slate, Salon, Guernica, The Baffler, and The New Republic. When not writing prose or teaching, he sings, plays bass and writes lyrics for NYC DIY pop punk band babygotbacktalk, who were named one of Afropunk’s “Top 8 Punkest Bands on the Planet Right Now. Sabrina Alli is a writer and educator living in Brooklyn, NY. Her writing has appeared in the Los Angeles Review of Books, Guernica, and The New Inquiry. She is currently at work on a book about early 20th century labor organizing, border crossing, and mixed race romance in the United States.