In Black Leopard, Red Wolf, Sogolon the Moon Witch proved a worthy adversary to Tracker as they clashed across a mythical African landscape in search of a mysterious boy who disappeared. In Moon Witch, Spider King, Sogolon takes center stage and gives her own account of what happened to the boy, and how she plotted and fought, triumphed and failed as she looked for him. It’s also the story of a century-long feud—seen through the eyes of a 177-year-old witch—that Sogolon had with the Aesi, chancellor to the king. It is said that Aesi works so closely with the king that together they are like the eight limbs of one spider. Aesi’s power is considerable—and deadly. It takes brains and courage to challenge him, which Sogolon does for reasons of her own.

Both a brilliant narrative device—seeing the story told in Black Leopard, Red Wolf from the perspective of an adversary and a woman—as well as a fascinating battle between different versions of empire, Moon Witch, Spider King delves into Sogolon’s world as she fights to tell her own story. Part adventure tale, part chronicle of an indomitable woman who bows to no man, it is a fascinating novel that explores power, personality, and the places where they overlap.

“Brilliant. . . If book one centers on the nature of storytelling, this volume turns its focus to memory, archiving, and history as Sogolon works to correct the record. The two stories run parallel to and contradict each other, and James mines the distance between them to raise powerful questions about whether truth is possible when the power of storytelling is available only to a few. This is a tour de force.” —Publishers Weekly (starred)

“If Black Leopard, Red Wolf is a penciled comic panel, Moon Witch, Spider King is the version rendered by James the inker: the geography, myth, magic, and people of this epic setting are revisited to add shading and detail in a recursive procedure that results in a vibrant tapestry begging for infinite return trips.” —Booklist (starred)

“James masterfully flips the first installment on its head. . . .Through Sogolon’s roving journeys across landscapes and decades, James makes the mythic tantalizingly real. Pick up this titanic story of empire, adventure, and power to see why the trilogy has earned the title ‘the African Game of Thrones.’" —Esquire 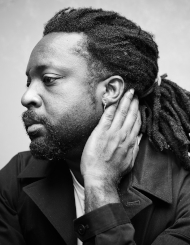