This year, we're celebrating Indie Bookstore Day online—selling exclusive merchandise on harvard.com and collecting your love notes to bookstores via our social media channels, and releasing a new Harvard Book Store t-shirt and sweatshirt design, featuring our throwback jester mascot and available at our shop on Bonfire.com. We also have a brand new Harvard Book Store lined journal for Independent Book Store Day 2021. Adorned with an original illustration created for Harvard Book Store, featuring a feline friend receiving a much awaited package, and printed here in the store on Paige M. Gutenborg, our book-making robot.

And what else do we love to salute on Independent Bookstore Day? Independent, small presses! Join us on Zoom at 8pm ET for our Indie Press Spotlight, featuring a panel of wonderful independent publishers, including Enchanted Lion Books, Europa Editions, Graywolf Press, Milkweed Editions, and Tin House. Listen as they share the latest and greatest books from their collections, and shop their picks here on harvard.com. Regisiter for the event here. 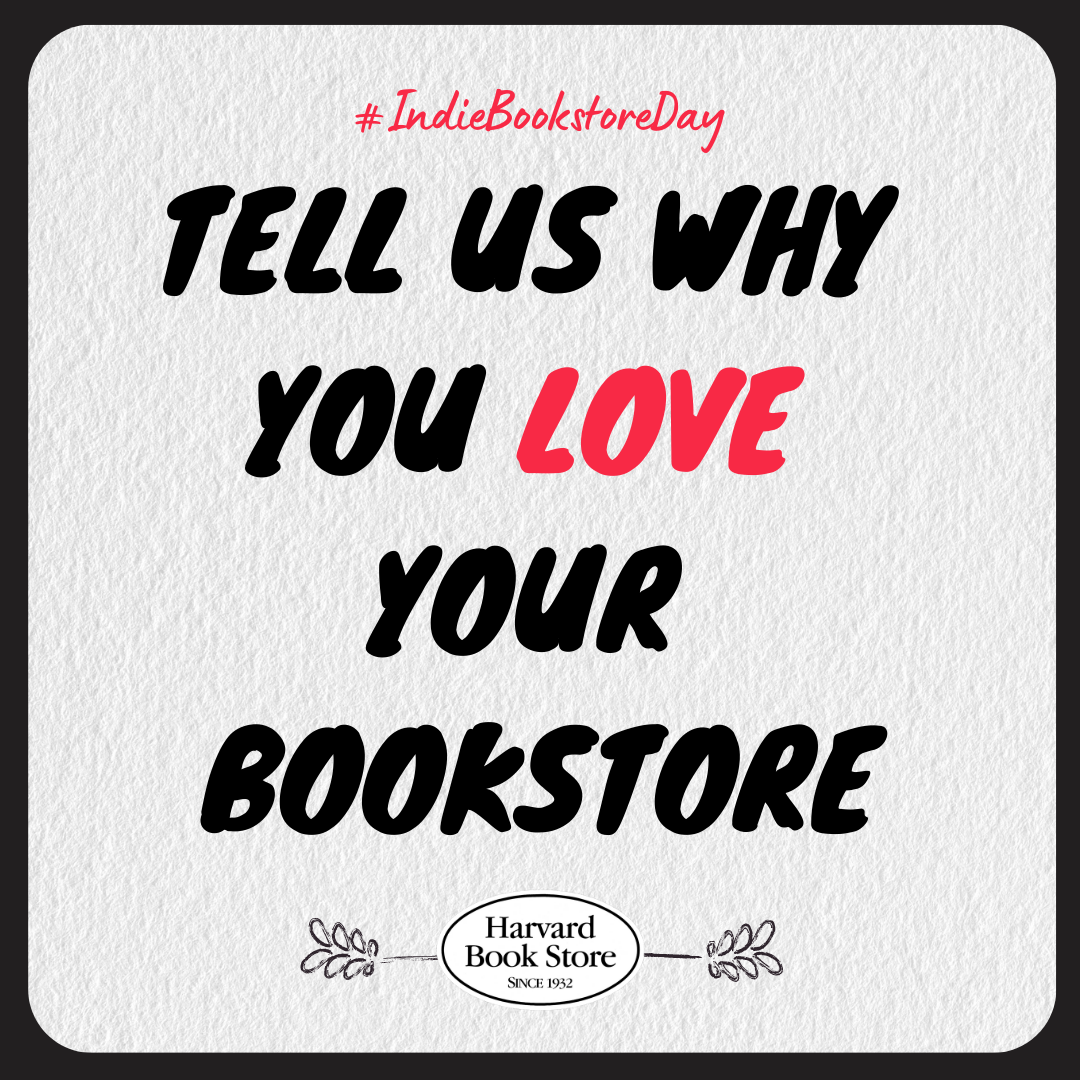 One of our favorite #indiebookstoreday traditions over the years was collecting your love notes to bookstores on a big banner on Plympton St. We’re partying virtually again this year, and bringing that tradition to social media for #indiebookstoreday. Come tell us why you love your bookstore, on Twitter, Instagram, or Facebook! 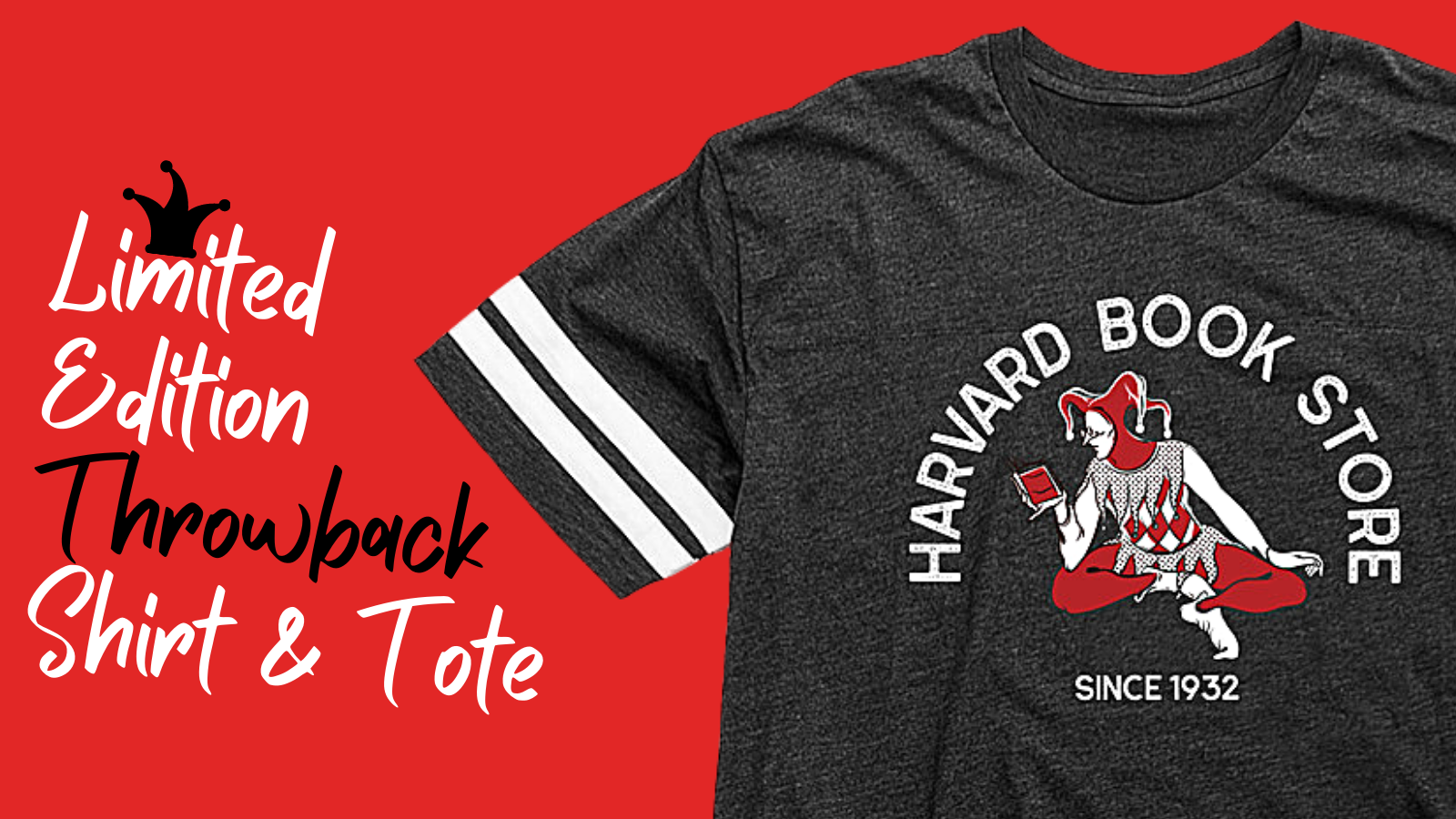 Kick off the Indie Bookstore Day festivities by supporting our latest fundraiser on Bonfire. We have shirts and tote bags with a new throwback design, featuring a jester with book in hand, which harkens back to the eighties. The Harvard Book Store jester adorned bookmarks and shopping bags for our Harvard Square flagship location, and a two-headed version (wearing a chef's hat and sipping a glass of wine) was the mascot for our Newbury Street bookstore café in Boston, which closed its doors in 1994.

This design is available as a t-shirt, jersey, sweatshirt, or tote bag, and is only available for a limited time only! 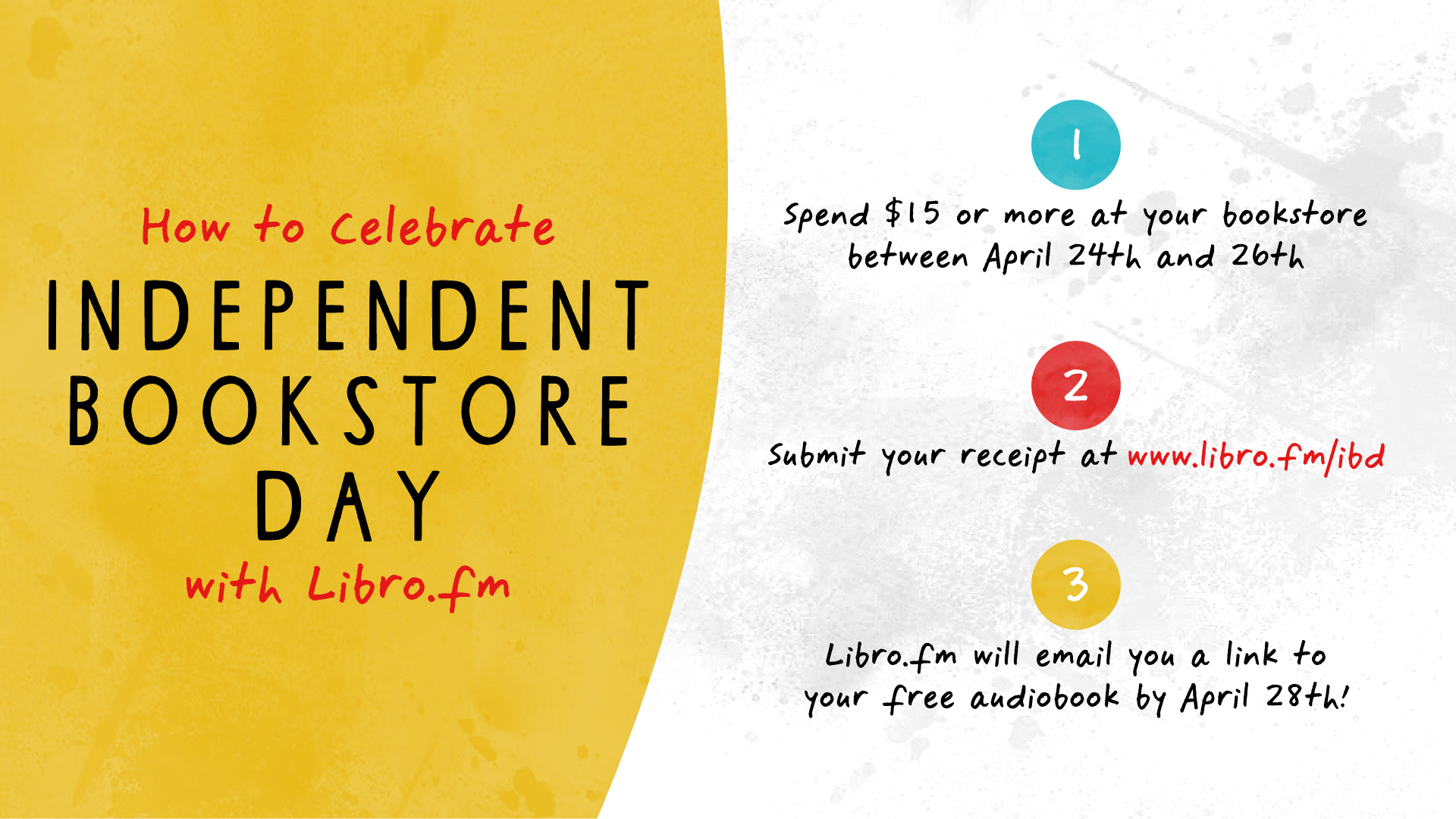 Spend $15 or more at Harvard Book Store April 24 – April 26 for Indie Bookstore Day and you can get a free select audiobook from our partners at Libro.fm! See the audiobook choices and get more details here.

The following items go on sale April 24 at 10am only at harvard.com (not for sale in-store). This exclusive merchandise is available only at participating independent bookstores for Indie Bookstore Day 2021! 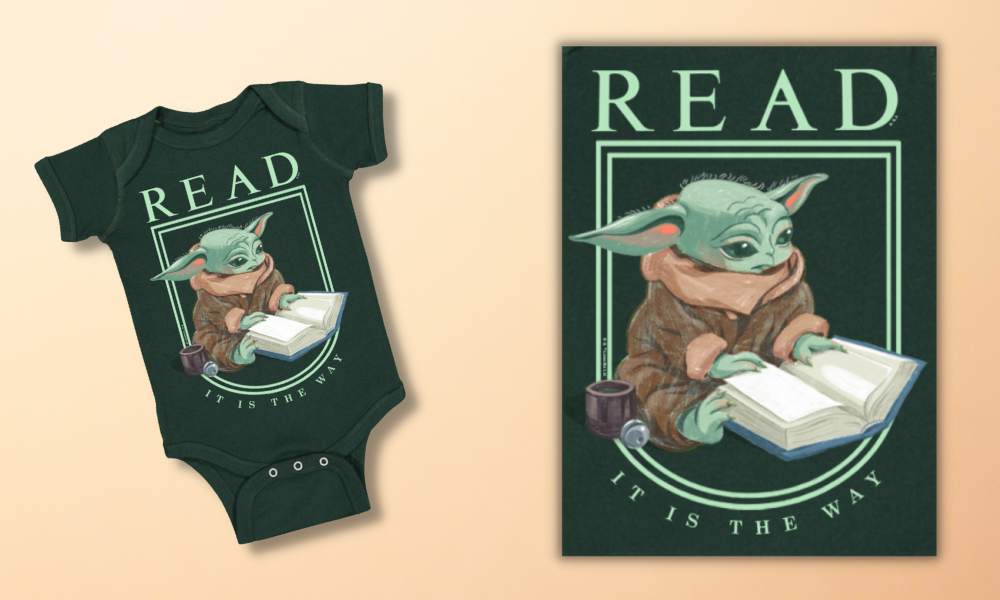 A Mandalorian twist on the American Library Association “READ” posters.

The ABCs of Black History Print 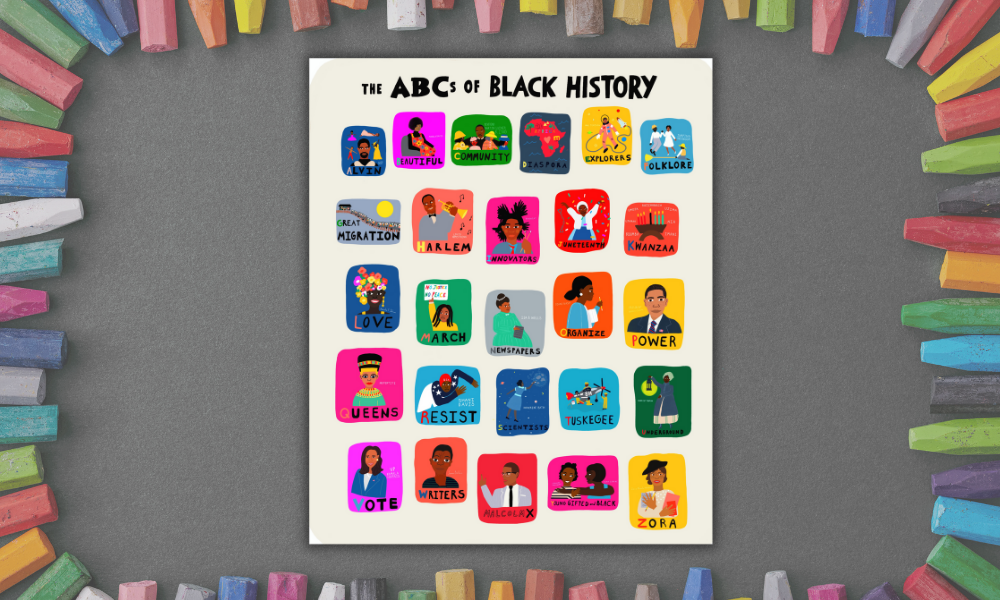 Based on the picture book, The ABCs of Black History by Rio Cortez, this exclusive ABC print was created by artist Lauren Semmer just for Indie Bookstore Day. Celebrate the story of Black history letter by letter. Workman will donate 10% of the proceeds to an organization supporting racial justice initiatives.

About the Artist: Lauren Semmer is an artist, children’s book illustrator, and designer. She studied drawing at St. Paul College of Visual Arts and art history at New York University. Lauren’s bright and charming work is featured on everything from kid’s wall art to children’s apparel. She lives in Manhattan with her family.

About the Arthor: Rio Cortez is a writer and Pushcart-nominated poet who has received fellowships from Poet’s House, Cave Canem, and CantoMundo foundations. Her work has appeared or is forthcoming in the Los Angeles Review of Books, The Miami Rail, and Mother Magazine, among others. Born and raised in Salt Lake City, Rio writes and lives in Harlem, USA. 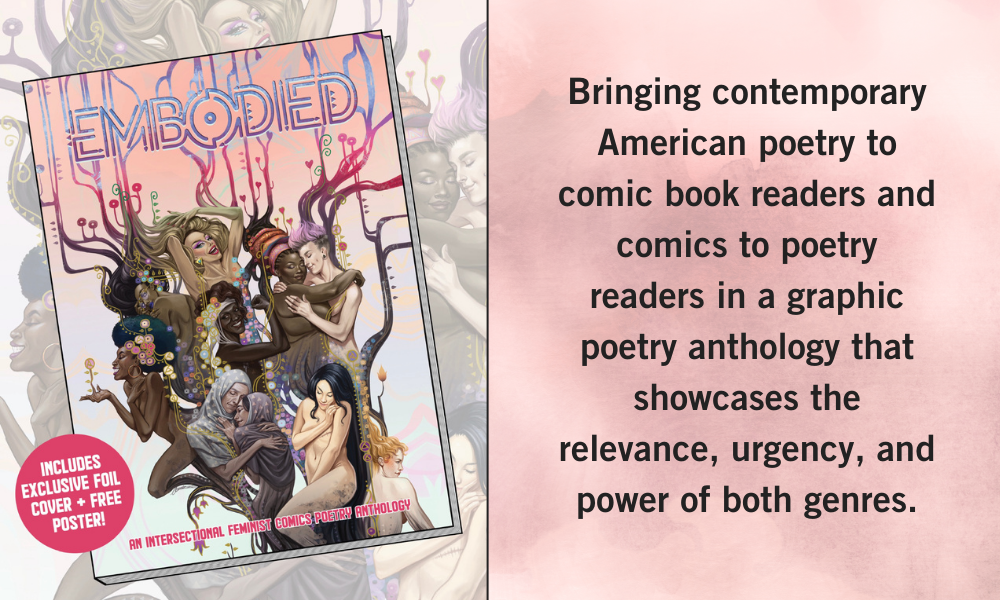 Embodied brings contemporary American poetry to comic book readers and comics to poetry readers in a graphic poetry anthology that showcases the relevance, urgency, and power of both genres. Featuring new work on the theme of gender, identity, and the body from twenty-one of America’s premier, award-winning female, trans, and non-binary poets who have been published in places like The New York Times and the New Yorker. Rather than being merely illustrated, the poems have been adapted into sequential art stories drawn, lettered, and colored by top female, trans, and non-binary artists. 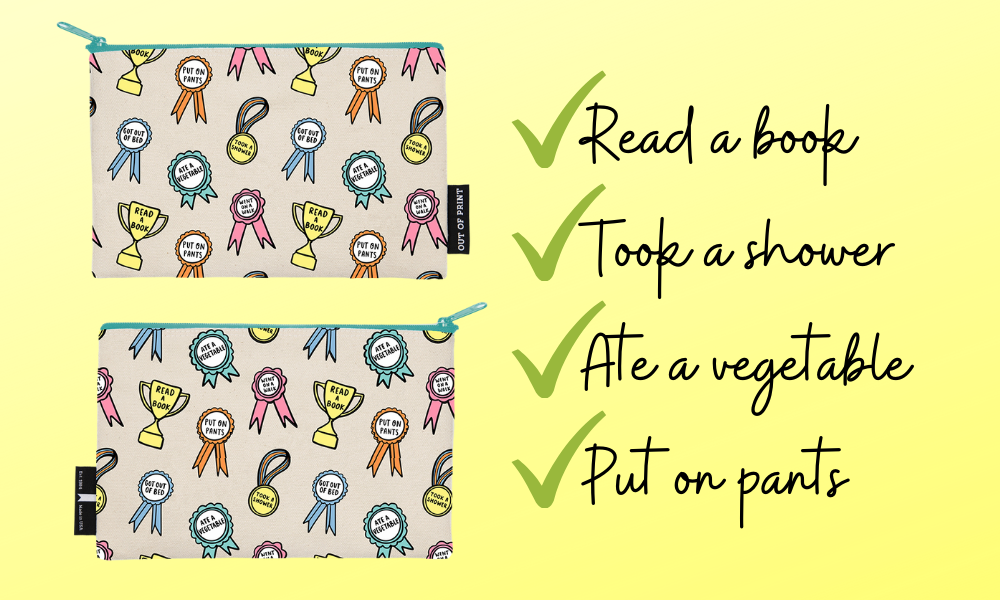 The “Little Victories” canvas pouch celebrates the small accomplishments that get us through each day. A perfect comment on our time. For pencils, make-up, and do-dads. Made in the U.S.A.

Being Alive is a Good Idea: A Conversation with Nikki Giovanni and Glory Edim (Saddle Stich Paperback) 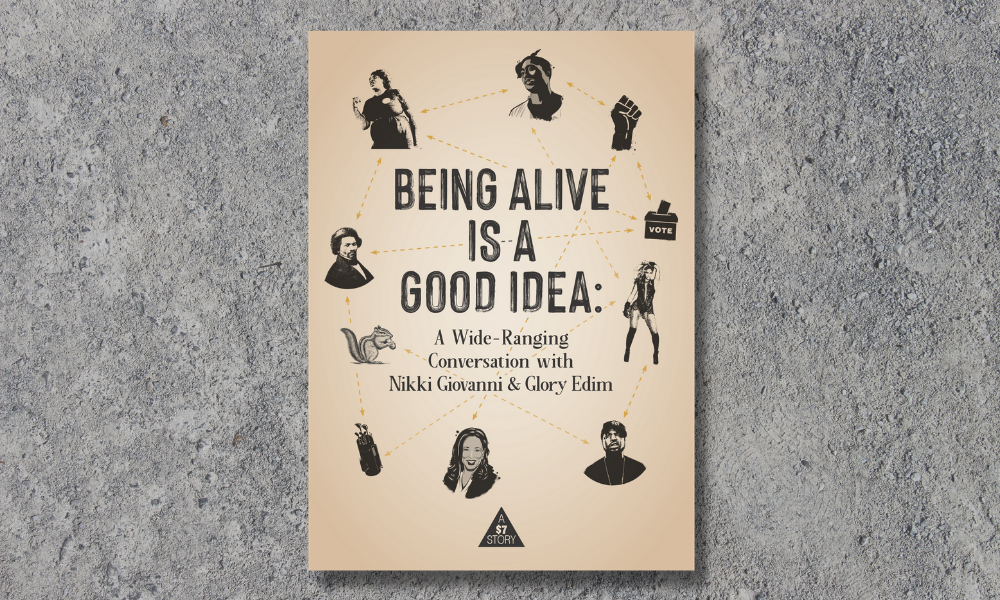 An edited transcript of the far-ranging conversation between Nikki Giovanni and Glory Edim (Well-Read Black Girl) at the fourth annual Well-Read Black Girl Festival in November 2020. In it they cover poetry, Tupac, Black Lives Matter, aliens, pencils, Kamala Harris, and much more. This conversation captures an important moment in time and a piece of literary history. Ms. Giovanni is a joy to behold.

Nikki Giovanni is a living legend. Her early work was centered as a response to the Civil Rights and Black Rights movements and has since inspired generations of poets and activists alike. Giovanni has also been a prominent voice in the Black Arts Movement and Black feminist movements, speaking openly about women’s gender equality and sexual freedom. She lives in Virgiania.

Glory Edim is the founder of Well-Read Black Girl (WRBG), a book club turned literary festival based in Brooklyn, NY. WRBG provides a vital space for Black women readers and writers to connect and grow in conversation. Since launching in 2015, WRBG has steadily grown into a thriving online community of 237K passionate Instagram followers. She lives in Los Angeles.

Exclusive SIGNED Edition of Sharks in the Time of Saviors (Paperback) 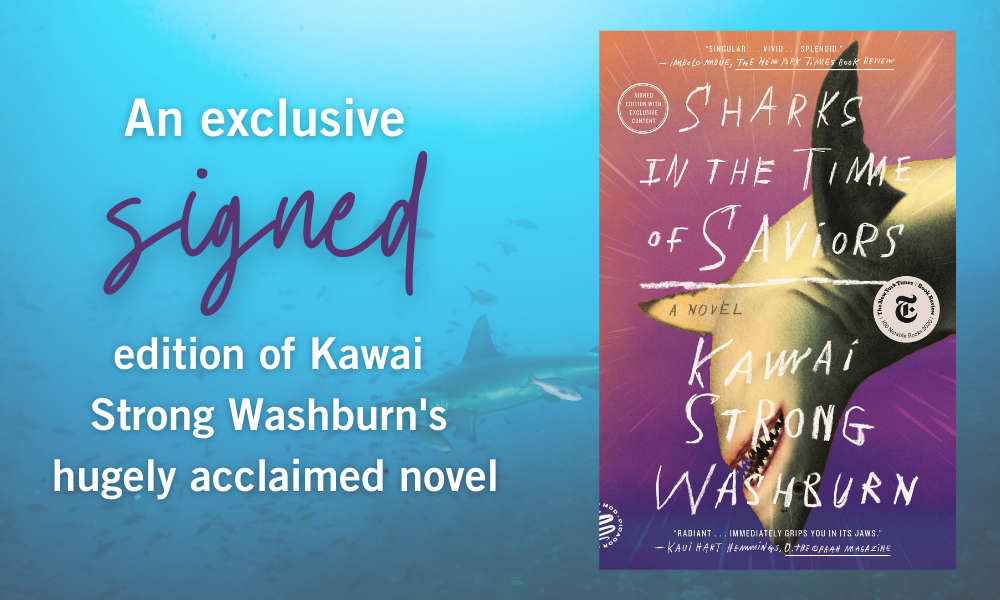 Kawai Strong Washburn was born and raised on the Hāmākua coast of the Big Island of Hawai’i, where he read loads of books, lived breathed slept soccer, played saxophone, and did all sorts of dangerous things on concrete and in the water. He now lives in Minneapolis, Minnesota with his family. He has a side job as a full-time software engineer, and occasionally does somewhat dangerous things on rock faces. 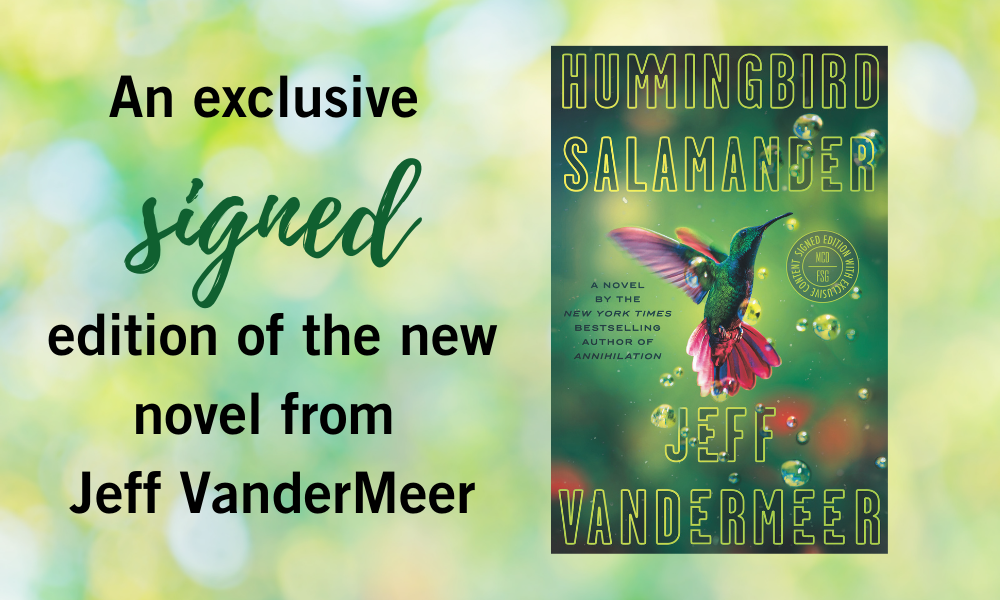 The new novel from the author of Annihilation, is a brilliant speculative thriller of dark conspiracy, endangered species, and the possible end of all things. Hummingbird Salamander is Jeff VanderMeer at his brilliant, cinematic best, wrapping profound questions about climate change, identity, and the world we live in into a tightly plotted thriller full of unexpected twists and elaborate conspiracy. Exclusive extra content in the form of journal entries of an investigator digging onto the life of the main character.

Jeff VanderMeer is the author of Dead Astronauts, Borne, and The Southern Reach Trilogy, the first volume of which, Annihilation, won the Nebula Award and the Shirley Jackson Award and was adapted into a movie by Alex Garland. He speaks and writes frequently about issues relating to climate change. VanderMeer lives in Tallahassee, Florida, with his wife, Ann VanderMeer, and their cats, plants, and bird feeders. 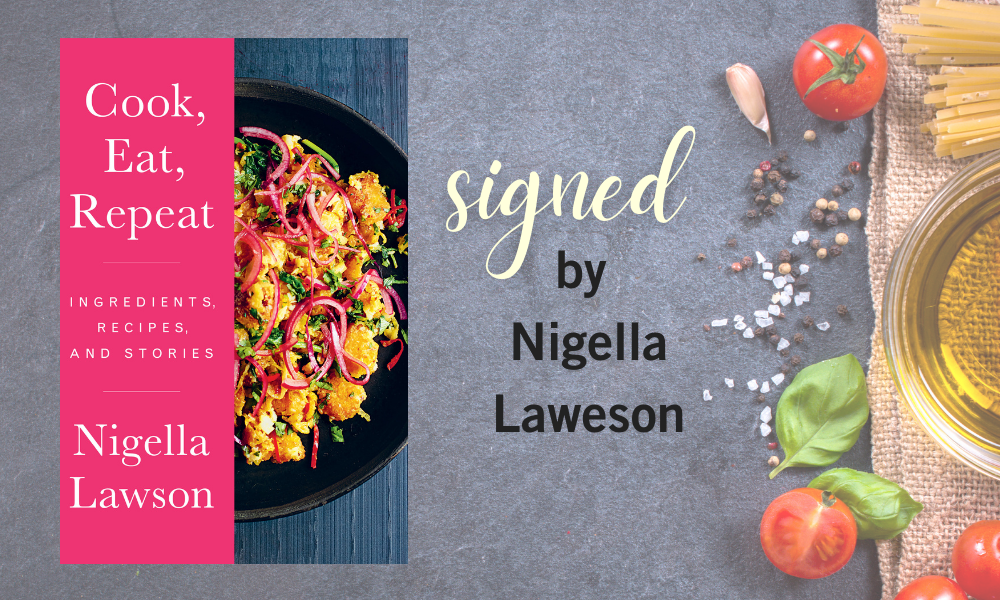 Cook, Eat, Repeat is a delicious and delightful combination of recipes intertwined with narrative essays about food, all written in Nigella’s engaging and insightful prose. Whether talking about the evolution and meaning of the recipe in ‘What is a Recipe?’ – ‘a recipe, much like a novel, is a living collaboration between writer and reader. And in both cases, it is the reader who keeps it alive’ – or exploring the heinous notion of the guilty pleasure in ‘Death to the Guilty Pleasure’, Nigella is by turns characteristically informative, intelligent, thought-provoking and amusing.

Nigella Lawson has written eleven bestselling cookery books including the classics How to Eat and How to Be a Domestic Goddess – the book that inspired a whole new generation of bakers. These books, and her TV series, have made her a household name around the world.

Every year we create our signature “Bad Citizen” Graffiti Stencil to highlight the authors and the words that push us to think, read, and be disruptive when necessary. This year’s stencil features a timely quote from George Orwell. “In a time of deceit telling the truth is a revolutionary act.”

George Orwell was born in Bengal and educated at Eton; after service with the Indian Imperial Police in Burma, he returned to Europe to earn his living penning novels and essays. An opponent of totalitarianism, he served in the Spanish Civil War. Besides his classic Animal Farm, his works include a novel based on his experiences as a colonial policeman, Burmese Days, two first hand studies of poverty, Down and Out in Paris and London and The Road to Wigan Pier, an account of his experiences in the Spanish Civil War, Homage to Catalonia; and the extraordinary novel of political prophecy whose title became part of our language, 1984. 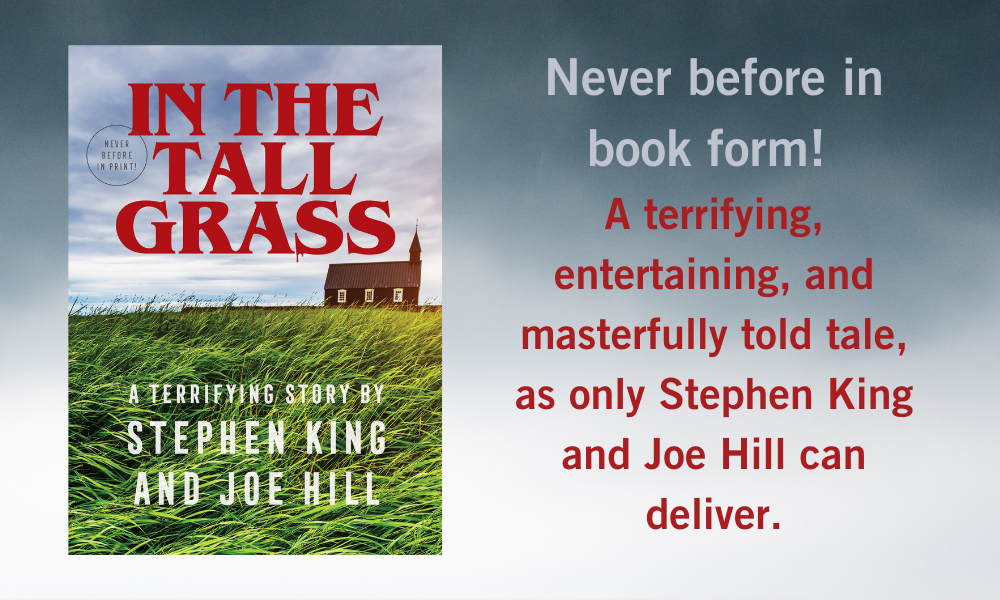 A short story never before in book form! “In the Tall Grass” begins with a sister and brother who pull off to the side of the road after hearing a young boy crying for help from beyond the tall grass. Within minutes they are disoriented, in deeper than seems possible, and they’ve lost one another. The boy’s cries are more and more desperate. What follows is a terrifying, entertaining, and masterfully told tale, as only Stephen King and Joe Hill can deliver.

Stephen King is the author of more than sixty books, all of them worldwide bestsellers. His recent work includes If It Bleeds, The Institute, Elevation, The Outsider, Sleeping Beauties (cowritten with his son Owen King), and the Bill Hodges trilogy: End of Watch, Finders Keepers, and Mr. Mercedes (an Edgar Award winner for Best Novel and an AT&T Audience Network original television series).

Joe Hill is the author of the New York Times bestsellers Heart-Shaped Box and Horns and writes an ongoing comic book series, Locke & Key. He makes lots of noise on Twitter under the handle @joe_hill. 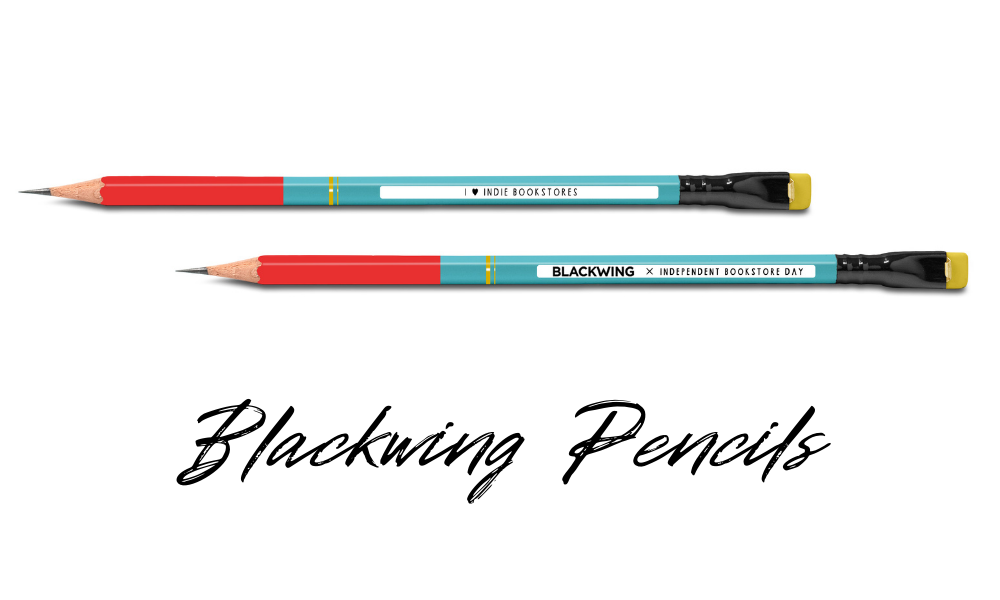 Blackwing & Independent Bookstore Day have teamed up to create this limited edition set to celebrate independent bookstores and the printed word. Each pencil features a design inspired by the spine of a book and includes a book-loving message and Blackwing’s firm graphite. Each box is beautifully designed to match the pencils and includes a pro-indie message.

The Blackwing pencil was the pencil of choice for award-winning authors throughout the 20th century. After it was discontinued in the 1990s, fans began paying $40 per pencil. In 2010 a small group of people bought Blackwing and brought back these extraordinary pencils (you really have to try one) for a growing culture of people looking to unplug and live mindfully. They now have a cultish following. blackwing602.com/

Independent bookstores are not just stores, they’re community centers and local anchors run by passionate readers. They are entire universes of ideas that contain the possibility of real serendipity. They are lively performance spaces and quiet places where aimless perusal is a day well spent.

Indie bookstores, whether dusty and labyrinthine or clean and well-lighted, are not just stores, they are solutions. They hold the key to your love life, your career, and your passions. Walking the aisles of a good bookstore means stumbling upon a novel from India that expands your heart. It’s encountering an art book that changes the direction of your life. It’s the joy of having a perfect stranger steer you toward the perfect book.

“Consumers control the marketplace by deciding where to spend their money. If what a bookstore offers matters to you, then shop at a bookstore. If you feel that the experience of reading a book is valuable, then read the book. This is how we change the world: we grab hold of it. We change ourselves.” —Ann Patchett, bestselling author and co-owner of Parnassus Books