Harvard Book Store welcomes novelist WILL CHANCELLOR for a reading from his debut work, A Brave Man Seven Storeys Tall: A Novel.

Will Chancellor presents a triumphant literary debut with notes of both The Art of Fielding and The Flamethrowers, which introduces the striking figure of Owen Burr, a gifted Olympics-bound athlete whose dreams of greatness are deferred and then transformed by an unlikely journey from California to Berlin, Athens, Iceland, and back again.

Owen Burr, a towering athlete at Stanford University, son of renowned classicist Professor Joseph Burr, was destined to compete in the Athens Olympic Games of 2004. But in his final match at Stanford, he is blinded in one eye. The wound shatters his identity and any prospects he had as an athlete.

Determined to make a new name for himself, Owen flees the country and lands in Berlin, where he meets a group of wildly successful artists living in the Teutonic equivalent of Warhol’s Factory. An irresistible sight—nearly seven-feet-tall, wearing an eye patch and a corduroy suit—Owen is quickly welcomed by the group’s leader, who schemes to appropriate Owen’s image and sell the results at Art Basel. With his warped and tortured image on the auction block, Owen seeks revenge.

Professor Burr has never been the father he wants to be. Owen’s disappearance triggers a call to action. He dusts off his more speculative theory, Liminalism, to embark on a speaking tour, pushing theory to its radical extreme—at his own peril and with Jean Baudrillard’s help—in order to send up flares for his son in Athens, Berlin, and Iceland.

A compulsively readable novel of ideas, action, and intrigue, A Brave Man Seven Storeys Tall offers a persuasive vision of personal agency, art, family, and the narratives we build for ourselves. 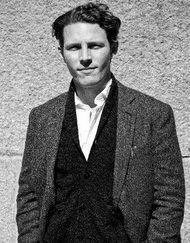 Will Chancellor is the author of A Brave Man Seven Storeys Tall: A Novel.