Native:
Dispatches from an Israeli-Palestinian Life

Sayed Kashua has been praised by the New York Times as “a master of subtle nuance in dealing with both Arab and Jewish society.” An Arab-Israeli who lived in Jerusalem for most of his life, Kashua started writing with the hope of creating one story that both Palestinians and Israelis could relate to, rather than two that cannot coexist together. He devoted his novels and his satirical weekly column published in Haaretz to telling the Palestinian story and exploring the contradictions of modern Israel, while also capturing the nuances of everyday family life in all its tenderness and chaos.

With an intimate tone fueled by deep-seated apprehension and razor-sharp ironic wit, Kashua has been documenting his own life as well as that of society at large: he writes about his children’s upbringing and encounters with racism, about fatherhood and married life, the Jewish-Arab conflict, his professional ambitions, travels around the world as an author, and—more than anything—his love of books and literature. He brings forth a series of brilliant, caustic, wry, and fearless reflections on social and cultural dynamics as experienced by someone who straddles two societies. Written between 2006 and 2014, Native reads like an unrestrained, profoundly thoughtful personal journal.

"Kashua simply narrates, column after column, the impossibility of living as an Arab in the Jewish state. Sure, the columns are still clever and entertaining in their left-handed anti-heroism. They succeed in being symbolic without dissonance or figurative effort. . . . This is among the most justified collections of newspaper columns ever published in Israel."  —Haaretz

"Startling and insightful. . . . Kashua conveys devastating social critique through dry wit, precise metaphor, and seemingly innocent subjects, while in the periphery the rife racism and rising body count speak to the increasing struggle to reconcile two drastically different viewpoints. . . . Kashua’s subtly shaded, necessarily complex, and ultimately despairing account of the tensions within his homeland, 'so beloved and so cursed,' is bound to open the eyes and awaken the sympathies of a new swath of loyal readers."  —Publishers Weekly 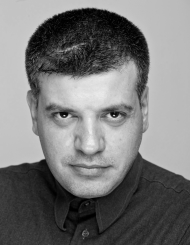 Sayed Kashua is the author of the novels Dancing Arabs, Let It Be Morning, which was shortlisted for the International IMPAC Dublin Literary Award, Second Person Singular, winner of the prestigious Bemstein Prize, and Native. He writes a weekly column for Haaretz and is the creator of the prize-winning sitcom Arab Labor. Now living in the United States with his family, he teaches at the University of Illinois.