Although Herman Melville’s Moby-Dick is beloved as one of the most profound and enduring works of American fiction, we rarely consider it a work of nature writing—or even a novel of the sea. Yet Pulitzer Prize–winning author Annie Dillard avers Moby-Dick is the “best book ever written about nature,” and nearly the entirety of the story is set on the waves, with scarcely a whiff of land. In fact, Ishmael’s sea yarn is in conversation with the nature writing of Emerson and Thoreau, and Melville himself did much more than live for a year in a cabin beside a pond. He set sail: to the far remote Pacific Ocean, spending more than three years at sea before writing his masterpiece in 1851.

A revelation for Moby-Dick devotees and neophytes alike, Ahab’s Rolling Sea is a chronological journey through the natural history of Melville’s novel. From white whales to whale intelligence, giant squids, barnacles, albatross, and sharks, Richard J. King examines what Melville knew from his own experiences and the sources available to a reader in the mid-1800s, exploring how and why Melville might have twisted what was known to serve his fiction. King then climbs to the crow’s nest, setting Melville in the context of the American perception of the ocean in 1851—at the very start of the Industrial Revolution and just before the publication of On the Origin of Species. King compares Ahab’s and Ishmael’s worldviews to how we see the ocean today: an expanse still immortal and sublime, but also in crisis. And although the concept of stewardship of the sea would have been entirely foreign, if not absurd, to Melville, King argues that Melville’s narrator Ishmael reveals his own tendencies toward what we would now call environmentalism.

Featuring a coffer of illustrations and an array of interviews with contemporary scientists, fishers, and whale watch operators, Ahab’s Rolling Sea offers new insight not only into a cherished masterwork and its author but also into our evolving relationship with the briny deep—from whale hunters to climate refugees.

“King decisively settles any lingering questions about Moby-Dick, nineteenth-century whales and whaling, and all lore and literature of the sea. More than establishing a factual basis for Ishmael’s fiction-making, King writes passionately on climate change, economic pressures on sea creatures, and the future Melville confronts in his marvelous encounter with the ‘wonder-world’ of whaling. . . . even if you haven’t read Moby-Dick, you will revel in this storehouse of fascinating tales and arcana, from Ambergris to Zeuglodon. A treasure for library, classroom, or bedside table.” —Wyn Kelley, Massachusetts Institute of Technology, author of Melville's City: Literary and Urban Form in Nineteenth-Century New York and Herman Melville: An Introduction

“It took me decades to appreciate that Melville’s messy, uncontainable, surging Moby-Dick is perhaps the greatest book ever written about the sea, and about the human relationship with the living world, and perhaps the only book sufficiently un-jaded by mercantilism and modernity to be worthy of the actual ocean itself in all its raw, uncontrollable, surging majesty. But if you don’t want to wait decades for Melville’s magnificence to be revealed, you can cheat and read King’s book. Ahab’s Rolling Sea is a marvelous guide to the magic and mystery that was Melville’s gift to us.” —Carl Safina, author of Song for the Blue Ocean: Encounters Along the World's Coasts and Beneath the Seas

“Ahab’s Rolling Sea is a wide-ranging, highly personal, richly eclectic, and extremely well-researched book whose style and humor, combined with its rigor, suggest the potential for popularity even beyond the fascinations of this self-confessed whalehead. Who could not warm to a chapter titled ‘Gulls, Sea-Ravens, and Albatrosses’ or ‘Sword-Fish and Lively Grounds,’ or be intrigued by ‘Phosphorescence’? There’s a Melvillean romance here, and it sits especially well with King’s love and empathy for human as well as natural history. A contemporary, witty, almost postmodern field guide.” —Philip Hoare, author of Leviathan 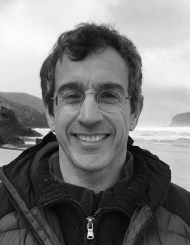 Richard J. King's Ahab's Rolling Sea: A Natural History of Moby-Dick is the work of a career of over two decades as a mariner and scholar studying literature of the sea. He is a visiting associate professor with the Sea Education Association in Woods Hole, MA, and is also the author of Lobster, which was acclaimed by the New York Times and The Wall Street Journal, and The Devil’s Cormorant: A Natural History, which was rated as one of the top five science books of 2013 by Library Journal. He writes and illustrates a quarterly column titled “Animals in Sea History” for Sea History magazine, is the Series Editor for "Seafaring America," and he edits the online reference "Searchable Sea Literature."