A Death in Summer

Harvard Book Store is thrilled to welcome back BENJAMIN BLACK, the crime-writing alter ego of Booker Prize–winning novelist John Banville, for a reading from his newest mystery, A Death in Summer.

On a sweltering summer afternoon, newspaper tycoon Richard Jewell—known to his many enemies as Diamond Dick—is discovered with his head blown off by a shotgun blast. But is it suicide or murder? For help with the investigation, Detective Inspector Hackett calls in his old friend Quirke, who has unusual access to Dublin's elite.

Jewell's coolly elegant French wife, Françoise, seems less than shocked by her husband's death. But Dannie, Jewell's high-strung sister, is devastated, and Quirke is surprised to learn that in her grief she has turned to an unexpected friend: David Sinclair, Quirke's ambitious assistant in the pathology lab at the Hospital of the Holy Family. Further, Sinclair has been seeing Quirke's fractious daughter Phoebe, and an unlikely romance is blossoming between the two. As a record heat wave envelops the city and the secret deals underpinning Diamond Dick's empire begin to be revealed, Quirke and Hackett find themselves caught up in a dark web of intrigue and violence that threatens to end in disaster. 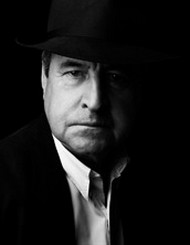 Benjamin Black is the pen name of the Booker Award winning-novelist John Banville. The author of the bestselling and critically acclaimed series of Quirke novels—Christine Falls, The Silver Swan, Elegy for April, and A Death In Summer—he lives in Dublin. Visit Benjamin Black's website at www.BenjaminBlackBooks.com.

Online ticket sales for this event have ended. Tickets are still available at Harvard Book Store and by phone at 617-661-1515. Tickets purchased online can be picked up when the doors open at the Brattle Theatre, around 5:30pm on Thursday, July 14.