Everybody Matters:
My Life Giving Voice

Harvard Book Store, together with Amnesty International and the Irish Consulate, is thrilled to welcome former President of Ireland MARY ROBINSON for a discussion of her memoir, Everybody Matters: My Life Giving Voice.

One of the most inspiring women of our age, Mary Robinson has spent her life in pursuit of a fairer world, becoming a powerful and influential voice for human rights around the globe. Displaying a gift for storytelling and remembrance, Robinson reveals, in Everybody Matters, what lies behind the vision, strength, and determination that made her path to prominence as compelling as any of her achievements.

Born in 1944 into a deeply Catholic family, she was poised to become a nun before finding her own true voice. Ever since, she has challenged convention in pursuit of fairness: whether in the Church, in government and politics, or in her own family.

As an activist lawyer, she won landmark cases advancing the causes of women and marginalized people against the prejudices of the day, and in her twenty years in the Irish Senate she promoted progressive legislation, including the legalizing of contraception. She shocked the political system by winning election as Irelands first woman president in l990, redefining the role and putting Ireland firmly on the international stage. Her role as UN high commissioner for human rights, beginning in 1997, was to prove an even bigger challenge; she won acclaim for bringing attention to victims worldwide but was often frustrated both by the bureaucracy and by the willingness to compromise on principle, which reveal the deep and inherent barriers to changing the status quo.

Now back in Ireland and heading her Mary Robinson Foundation-Climate Justice, she has found the independence she needs to work effectively on behalf of the millions of poor around the world most affected by climate change. Told with the same calm conviction and modest pride that has guided her life, Everybody Matters will inspire anyone who reads it with the belief that each of us can, in our own way, help to change the world for the better. 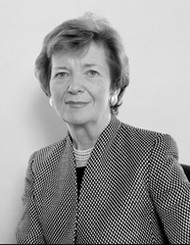 Mary Robinson served as the seventh, and first female, president of Ireland from 1990-1997, and as United Nations High Commissioner for Human Rights from 1997-2002. Robinson has been honorary president of Oxfam International since 2002, and has chaired numerous bodies, including the GAVI Alliance, vaccinating children worldwide, and the Council of Women World Leaders (of which she was a cofounder). She is a member of the Elders, an independent group of global leaders brought together by Nelson Mandela. A member of the American Philosophical Society, she is the recipient of numerous awards and honors, including the U.S. Presidential Medal of Freedom and the Indira Gandhi and Sydney Peace Prizes. She is president of the Mary Robinson Foundation-Climate Justice, and lives with her husband, Nick Robinson, in Dublin and Mayo.

Online ticket sales have now ended, but tickets can still be purchased at Harvard Book Store and by phone at 617-661-1515 until 5pm the day of the event. Remaining tickets will be on sale at the door of the First Parish Church when we open doors at about 6:30.

Tickets are non-refundable. Please note that your ticket ONLY guarantees you a seat until five minutes before an event begins. $5 tickets are also coupons, good for $5 off a purchase at events or at Harvard Book Store. Coupons expire one month after the event, and cannot be used for online purchases, event tickets, or gift certificates. Additionally, tickets purchased online may only be picked up at the venue the night of the event, and cannot be picked up in-store beforehand.