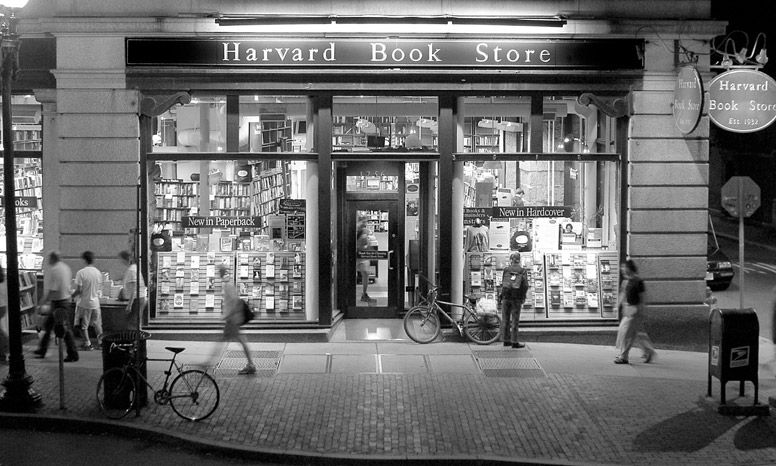 Harvard Book Store was founded in 1932 by Mark S. Kramer, a native of Boston. With $300 borrowed from his parents, he opened a small shop selling used and bargain general interest books at 19 Boylston Street (now JFK Street) in Cambridge. In 1934, Mark married Pauline, and she joined him in the business. Early on, the Kramers established a reputation for personal service and broad inventory, which still distinguishes the philosophy of Harvard Book Store.

In 1950, the store moved in next door to what is now Mr. Bartley’s Burgers. Frank Kramer, Mark and Pauline’s son, entered the business in 1962, and under his direction the store continued to expand. We would go on to open a second storefront in 1971, a store for new books. Two separate Harvard Book Store storefronts coexisted, sandwiching the camera shop Ferranti-Dege, until we consolidated in 1980 and Ferranti-Dege moved down the street. A clothing store moved in next to Bartley's, and then in 1987 we expanded to fill all three storefronts, the space that we occupy today.

In addition to our main Cambridge locations, in 1980 we opened the Harvard Book Store Cafe at 190 Newbury Street in Boston. The first bookstore cafe in the city, and one of the first in the country, it pioneered bookstore events in the area, working with the Boston Public Library to bring many important authors to the city. Over the years, Harvard Book Store, Inc. has operated a number of other stores in Boston and Cambridge, including locations at Northeastern University, Boston University, Tufts, and the New England School of Law, and a law book annex around the corner from our current location. In 1994, the lease at the Cafe could not be renewed and it closed, leaving the store we have today as our sole operation.

2007 marked our 75th anniversary, and in recognition of the Kramer family’s and the store’s importance to the community, the city of Cambridge designated the corner of Mass. Ave. and Plympton St. as “Frank, Mark, and Pauline Kramer Square.”

In June of 2008, after having actively directed the company for over forty years, Frank Kramer announced his intention to sell the store. In his announcement, he said he was looking for someone “who would keep Harvard Book Store alive as the vibrant, independent bookstore it has been for seventy-six years, one who knows and loves the store for what it has been, and who has a vision for a future that honors our unique history.”

When the purchase of the store by local book lovers Jeff Mayersohn and Linda Seamonson was announced in October of 2008, Frank said, “I’m overjoyed to tell you that I have found that person. Jeff Mayersohn has been a loyal Harvard Book Store customer for over thirty years, is a serious book lover and, recently retired from the tech world, he, with his wife Linda, were the ideal new owners for Harvard Book Store.”

Harvard Book Store has continued to innovate and to lead the way in supporting local and sustainable business. In 2008, we opened our Somerville warehouse to customers for a few weekends a year. The warehouse sale has become one of the most popular events in the store’s calendar, drawing many thousands of customers for each sale. In 2010 we relaunched our website with a look and feel that replicates the in-store shopping experience and exemplifies the best of Harvard Book Store. At harvard.com customers can browse our shelves, read our wide-ranging staff recommendations, peruse our interactive events calendar, and discover a great selection of books.

In December 2021, John W. Henry—principal owner of the Boston Globe and the Boston Red Sox, among other holdings—joined the Harvard Book Store ownership group, and In July 2022, we announced that we would be opening a second location at the Prudential Center in Boston in the spring of 2023.

Throughout its history, Harvard Book Store has been active in the local community and in bookselling—holding active roles on American Booksellers Association committees and boards, and in the New England Independent Booksellers Association. The store is also a founding member of Cambridge Local First, a strong and successful independent business alliance. In 2002, the bookstore was awarded the prestigious "Bookseller of the Year" Award from Publishers Weekly. Over the years the bookstore has been frequently recognized by local polls and publications, including Boston magazine's Best of Boston® awards for "Best Bookstore" (2014), "Best Literary Series" (2017, 2018), "Best Neighborhood Shop" (2019), “Best Virtual Author Series” (2020, 2021), and “Best Old-School Bookstore” (2022).