In the Founders' Footsteps:
Landmarks of the American Revolution

Harvard Book Store welcomes artist and lecturer in Yale's Humanities Department ADAM VAN DOREN for a discussion of his new book In the Founders' Footsteps: Landmarks of the American Revolution.

About In the Founders' Footsteps

There is always something new to be found in America’s past that also brings greater clarity to our present and the future we choose to make as a nation. Author-artist Adam Van Doren traveled from Maine to Georgia in that spirit. There are thirty-seven landmarks included, with fifteen additional locations noted in brief. From the Bunker Hill monument in Massachusetts to the Camden Battlefield Site in South Carolina, this is a tour of an American cultural landscape with a curious, perceptive, and insightful guide.

The reader steps inside cabins at Valley Forge where nearly two thousand soldiers perished during a cruel winter, meets the chef at Philadelphia’s City Tavern where the menu is based on 18th century fare, seeks out the Swamp Fox in Georgia, visits the homes of Alexander Hamilton, John and Abigail Adams, the Joseph Webb House on the Connecticut River where French general Rochambeau made plans with Washington, and much more. An unvarnished view, we also see Philipsburg Manor, in Sleepy Hollow, New York, where Blacks were once held as slaves to work in the Hudson River Valley.

For armchair travelers and anyone fascinated by Americana, Van Doren (The House Tells the Story: Homes of the American Presidents) has created an unforgettable journey through history. We see the Founders—both their stunning achievements and chilling moral failures—where they lived, fought, and agreed on a common purpose, to create a nation whose future—and legacy—is continually evolving.

Praise for In the Founders' Footsteps

“This is not just a pretty book—though Adam Van Doren’s many watercolors are pretty indeed—but is wise and fascinating too, reminding us of events and way-stations that we well knew—Concord to Yorktown by way of Bunker Hill and Valley Forge—and of places and happenings we have long forgotten. The seven years of the Revolutionary War are retold with a measured sympathy—no jingoism here!—and we must be grateful for the images and words of a supremely able historian and artist.” —Simon Winchester, author of The Professor and the Madman

“In this gorgeous volume, Adam Van Doren illustrates with generosity and wise beauty those places and “gentle phantoms”—from Bunker Hill to the Georgia swamp, from Phillis Wheatley to Thomas Paine—that helped create an American republic and inhabit it still. In Van Doren’s delicious, brilliant retelling, and in these luminous pictures, history walks again, upright, complex, and humane: Not to be missed.” —Brenda Wineapple, author of The Impeachers

“Adam Van Doren has succeeded where so many histories do not, in conveying a vivid sense of the different places that gave rise to our hard-won independence. John Adams famously argued that the Revolution had to be won in the “minds and hearts” of the American people; this lovely book appeals to both.” —Ted Widmer, author of Lincoln on the Verge 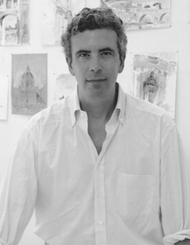 Adam Van Doren teaches art in the Humanities Department at Yale, where he is an Associate Fellow. He received his Masters at Columbia University and was a Visiting Artist at the American Academy in Rome. His work is included in the collections of the Art Institute of Chicago, the Wadsworth Atheneum, and the Museum of Fine Arts, Boston, among others. He is the author of The House Tells the Story: Homes of the American Presidents, The Stones of Yale, and An Artist in Venice. He was born in Boston and lives in New York.