Natural Born Heroes:
How A Daring Band of Misfits Mastered the Lost Secrets of Strength and Endurance

Harvard Book Store welcomes CHRISTOPHER MCDOUGALL, acclaimed author of Born to Run, for a one-of-a-kind stage show that explores the lost arts of the hero. Learn about knife-throwing, freerunning, foraging for free super-food, and tapping into body fat as performance fuel. McDougall will be joined by guest speakers including Wild Fitness creator Tara Wood and Parkour experts Dan Edwardes and Dr. Julie Angel.

Join us for either of two events on Saturday, April 18—2pm at the Old South Church in Boston, steps from the Boston Marathon finish line, or at 7pm in Cambridge, at Harvard Book Store.

More details about these events can be found on the author’s website: chrismcdougall.com.

Join Chris for a Run!

Fun runs, organized by the author, will precede the 2pm event. The run is free, though runners must still hold a ticket to gain admission to the 2pm event. For those attending the event at the Old South Church, meet at 12:00pm at the church steps. Please note that there will be no fun run for the 7pm event at the Harvard Book Store.

Christopher McDougall taught us how to run. Now, he teaches us how to move in a new book, Natural Born Heroes: How A Daring Band of Misfits Mastered the Lost Secrets of Strength and Endurance.

In Natural Born Heroes the author of Born to Run now travels to the Mediterranean, where he discovers that the secrets of ancient Greek heroes are still alive and well on the island of Crete, and ready to be unleashed in the muscles and minds of casual athletes and aspiring heroes everywhere.

After running an ultramarathon through the Copper Canyons of Mexico, Christopher McDougall finds his next great adventure on the razor-sharp mountains of Crete, where a band of Resistance fighters in World War II plotted the daring abduction of a German general from the heart of the Nazi occupation. How did a penniless artist, a young shepherd, and a playboy poet believe they could carry out such a remarkable feat of strength and endurance, smuggling the general past thousands of Nazi pursuers, with little more than their own wits and courage to guide them?

McDougall makes his way to the island to find the answer and retrace their steps, experiencing firsthand the extreme physical challenges the Resistance fighters and their local allies faced. On Crete, the birthplace of the classical Greek heroism that spawned the likes of Herakles and Odysseus, McDougall discovers the tools of the hero—natural movement, extraordinary endurance, and efficient nutrition. All of these skills, McDougall learns, are still practiced in far-flung pockets throughout the world today.

More than a mystery of remarkable people and cunning schemes, Natural Born Heroes is a fascinating investigation into the lost art of the hero, taking us from the streets of London at midnight to the beaches of Brazil at dawn, from the mountains of Colorado to McDougall’s own backyard in Pennsylvania, all places where modern-day athletes are honing ancient skills so they’re ready for anything.

Just as Born to Run inspired readers to get off the treadmill, out of their shoes, and into the natural world, Natural Born Heroes will inspire them to leave the gym and take their fitness routine to nature—to climb, swim, skip, throw, and jump their way to their own heroic feats. 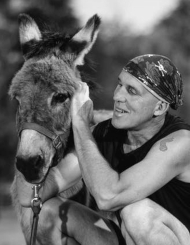 All pre-sales tickets includes a copy of Natural Born Heroes, admission into the event, one seat at the event, and a $5 coupon for use in the bookstore. For two weeks only (starting March 10), before the regular $5 ticket goes on sale, pre-sales tickets will be available.

Please note that your ticket ONLY guarantees you admission until five minutes before an event begins. Additionally, tickets purchased online may only be picked up at the venue the night of the event, and cannot be picked up in-store beforehand. This includes all books bundled with pre-sales tickets. $5 coupons are good for $5 off an in-store purchase at Harvard Book Store. Coupons expire one month after the event, and cannot be used for online purchases, event tickets, discounted items, or gift certificates.