Edge of Chaos:
Why Democracy Is Failing to Deliver Economic Growth—And How to Fix It

Harvard Book Store and Mass Humanities welcome award-winning international economist DAMBISA MOYO—author of Winner Take All and Dead Aid—for a discussion of her latest book, Edge of Chaos: Why Democracy Is Failing to Deliver Economic Growth and How to Fix It.

About Edge of Chaos

In Edge of Chaos, Dambisa Moyo shows why economic growth is essential to global stability, and why liberal democracies are failing to produce it today. Rather than turning away from democracy, she argues, we must fundamentally reform it. Edge of Chaos presents a radical blueprint for change in order to galvanize growth and ensure the survival of democracy in the twenty-first century.

"Edge of Chaos is intensely focused in its purpose and forthright in its findings. It has narrative drive; it is not self-indulgent or too long; and it uses statistics and other factual evidence from wide-ranging sources to powerful polemical effect." —Literary Review

"The author’s program of remedy is provocative and of much interest to advocates of growth. Moyo clearly identifies systemic problems that the democracies—or what’s left of them—would do well to address." —Kirkus Reviews 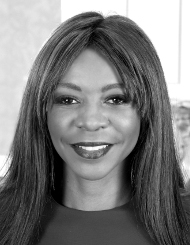 Dambisa Moyo is a prize-winning economist. The author of New York Times best sellers Winner Take All and Dead Aid, she was named one of the "100 Most Influential People in the World" by Time Magazine. Moyo is a regular contributor to the Wall Street Journal and Financial Times. She lives in New York City.