College was supposed to be an escape for Emily Skinner. But after failing out of school, she’s left with no choice but to return to her small hometown in the Ozarks, a place run on gossip and good Christian values.

She’s not alone. Emily’s former best friend—and childhood crush—Jody Monroe is back with a baby. Emily can’t resist the opportunity to reconnect, despite the uncomfortable way things ended between them and her mom’s disapproval of their friendship. When Emily stumbles upon a meth lab on Jody’s property, she realizes just how far they’ve both fallen.

Emily intends to keep her distance from Jody, but when she’s kicked out of her house with no money and nowhere to go, a paying job as Jody’s live-in babysitter is hard to pass up. As they grow closer, Emily glimpses a future for the first time since coming home. She dismisses her worries; the meth is a means to an end. And besides, for Emily, Jody is the real drug.

But when Emily’s role in Jody’s business turns dangerous, her choices reveal grave consequences. As the lies pile up, Emily will learn just how far Jody is willing to go to save her own skin—and how much Emily herself has risked for the love of someone who may never truly love her back.

Echoing the work of authors like Daniel Woodrell and Sarah Waters, Cottonmouths is an unflinching story about the ways in which the past pulls us back . . . despite our best efforts to leave it behind.

"With prose as lyrical and languid as a hot Arkansas summer, Kelly J. Ford explores the myopia of desire—and its tragic aftermath. I found myself torn between wanting to rip through these pages to find out what would happen, and a need to slow down and savor Ford’s sentences. A remarkable debut." —Lisa Borders, author of The Fifty-First State

"A taut page-turner trembling with desire and regret, Kelly J. Ford’s debut Cottonmouths, strips away nostalgia for person and place when the return of one young woman reveals the rotting core of a small southern town, unraveling with the ferocity of addiction, and forcing a painful lesson—she must learn to let go of her delusions in both love and friendship before it’s too late." —Michelle Hoover, author of Bottomland

“Part noir, part Southern Gothic, Cottonmouths is far more than the sum of these parts, an original story that haunted me after I read it. Kelly Ford’s unflinching prose plunges readers into the town of Drear’s Bluff, where what’s familiar isn’t what’s safe and where desire proves deadly.” —Stephanie Gayle, author of Idyll Threats 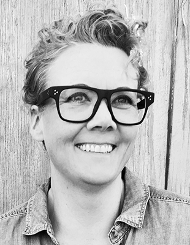 Kelly J. Ford is an instructor for GrubStreet Writing Center in Boston. She attended GrubStreet’s Novel Incubator program, a yearlong MFA-level course in novel writing. Her fiction has appeared in Black Heart Magazine, Fried Chicken and Coffee, and Knee-Jerk Magazine. She is originally from Fort Smith, Arkansas and resides in Somerville, Massachusetts with her wife. Cottonmouths is her debut novel.