A Hope More Powerful Than the Sea:
One Refugee's Incredible Story of Love, Loss, & Survival

Harvard Book Store welcomes MELISSA FLEMING, Head of Communications and Chief Spokesperson for the United Nations High Commissioner for Refugees, for a discussion of her first book, A Hope More Powerful Than the Sea: One Refugee's Incredible Story of Love, Loss, & Survival.

About A Hope More Powerful Than the Sea

Emotionally riveting and eye-opening, A Hope More Powerful Than the Sea is the incredible story of a young woman, an international crisis, and the triumph of the human spirit.

Melissa Fleming shares the harrowing journey of Doaa Al Zamel, a young Syrian refugee in search of a better life. Doaa and her family leave war-torn Syria for Egypt where the climate is becoming politically unstable and increasingly dangerous. She meets and falls in love with Bassem, a former Free Syrian Army fighter and together they decide to leave behind the hardship and harassment they face in Egypt to flee for Europe, joining the ranks of the thousands of refugees who make the dangerous journey across the Mediterranean on overcrowded and run-down ships to seek asylum overseas and begin a new life. After four days at sea, their boat is sunk by another boat filled with angry men shouting threats and insults. With no land in sight and surrounded by bloated, floating corpses, Doaa is adrift with a child’s inflatable water ring around her waist, while two little girls cling to her neck. Doaa must stay alive for them. She must not lose strength. She must not lose hope.

"Melissa Fleming's tale of a young Syrian woman's search for peace and safety is a book written for our times. On every page, loss and hope tangle. On every page, the human toll of the worst humanitarian crisis of our time is painfully, heartbreakingly brought home. This is an emotional read, at times painful, but it is above all a poignant tribute to hope, to resilience, and to the capacity for grace and generosity that dwells deep in the human heart." —Khaled Hosseini, author of The Kite Runner and And the Mountains Echoed

"I think Melissa Fleming is one of the most important people in the world. As the world's foremost advocate for refugees, she has worked tirelessly to put a human face on the greatest crisis of our time. There is no more important calling than this. Millions have been displaced by the wars in Iraq and Syria, and their situation is desperate. Yet everyone who has worked with refugees is amazed by their resilience and spirit. There is no better way to demonstrate this spirit than with the power of a single story. Melissa has found that story. The story of Doaa is dramatic, riveting, and ultimately hopeful. A Hope More Powerful Than the Sea provides a portrait of the refugee crisis that cannot be matched by any amount of cable news coverage." —Brandon Stanton, Humans of New York 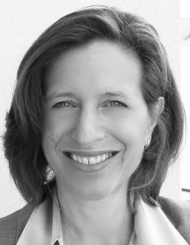 Melissa Fleming is Head of Communications and Chief Spokesperson for the United Nations High Commissioner for Refugees (UNHCR) and one of the world’s experts on refugees. She is a frequent contributor for The New York Times, The Washington Post, CNN, and NPR. A Hope More Powerful Than the Sea is her first book.