Harvard Book Store and the Lakshmi Mittal South Asia Institute at Harvard welcome acclaimed writer and professor RAMACHANDRA GUHA—the award-winning author of India After Gandhi—for a discussion of his latest book, Gandhi: The Years That Changed the World, 1914-1948.

The second and concluding volume of the magisterial biography that began with Gandhi Before India, Gandhi: The Years That Changed the World is the definitive portrait of the life and work of one of the most abidingly influential—and controversial—men in world history.

This volume opens with Mohandas Gandhi's arrival in Bombay in January 1915 and takes us through his epic struggles over the next three decades: to deliver India from British rule, to forge harmonious relations between India's Hindu and Muslim populations, to end the pernicious Hindu practice of untouchability, and to develop India's economic and moral self-reliance. We see how in each of these campaigns, Gandhi adapted methods of nonviolence—strikes, marches, fasts—that successfully challenged British authority, religious orthodoxy, social customs, and would influence non-violent, revolutionary movements throughout the world.

In reconstructing Gandhi's life and work, Ramachandra Guha has drawn on sixty different archival collections, the most significant among them, a previously unavailable collection of papers belonging to Gandhi himself. Using this wealth of material, Guha creates a portrait of Gandhi and of those closest to him—family, friends, political and social leaders—that illuminates the complexity inside his thinking, his motives, his actions and their outcomes as he engaged with every important aspect of social and public life in the India of his time.

“A massive and much-needed study of [Guha’s] subject’s emergence as a world leader . . . Superb. On nearly every page, Guha offers evidence why Gandhi remains relevant in the world 70 years after his death.” —Kirkus Reviews (starred review)

“Guha mines newly discovered archival material to produce a portrait of the Indian leader that is both panoramic in scope and surprisingly intimate, both admiring of Gandhi and cognizant of his flaws . . . Incisively written, this is a landmark account of Gandhi’s engagement with the world he would transform forever.” —Publishers Weekly (starred review)

“Guha is a brilliant historian who combines the gift of a storyteller, the discipline of an academic and the critical ability of seeing Gandhi as a fascinating human being, by not placing him on a pedestal . . . [He] has re-created the past by connecting scattered dots . . . to weave a rich tapestry.” —San Francisco Chronicle 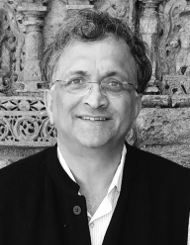 Ramachandra Guha has taught at Yale and Stanford universities, the University of Oslo, the Indian Institute of Science, and the London School of Economics. His books include the award-winning India After Gandhi and Gandhi Before India, which was a 2014 New York Times Notable Book and a San Francisco Chronicle Best Book of the Year. He writes regularly on social and political issues for the New York Times and for the British and Indian presses including the Telegraph and the Hindustan Times. He lives in Bangalore, India.

Tickets are available online only at harvard.com and harvardbookstore.eventbrite.com. All tickets for this event include a $5 coupon for use in the bookstore. Pre-sale tickets include a copy of Gandhi. Books bundled with pre-sale tickets may only be picked up at the venue the night of the event, and cannot be picked up in-store beforehand.