Trust:
Creating the Foundation for Entrepreneurship in Developing Countries

Entrepreneurial ventures often fail in the developing world because of the lack of something taken for granted in the developed world: trust. Over centuries, the developed world has built customs and institutions such as enforceable contracts, an impartial legal system, and credible regulatory bodies—and even unofficial but respected sources of information such as Yelp and Consumer Reports—that have created a high level of what scholar and entrepreneur Tarun Khanna calls "ambient trust."

This is not the case in the developing world. But Khanna shows that rather than become casualties of mistrust, smart entrepreneurs can adopt the mindset that, like it or not, it's up to them to weave their own independent web of trust—with their employees, their partners, their clients, their customers, and society as a whole. This can be challenging, and it requires innovative approaches in places where the level of societal mistrust is so high that an official certification of quality simply arouses suspicion—and lowers sales! Using vivid examples from Brazil, China, India, Mexico, and elsewhere, Khanna's stories show how entrepreneurs can build on existing customs and practices instead of trying to push against them. He highlights the role new technologies can play (but cautions that these are not panaceas) and explains how entrepreneurs can find dependable partners in national and local governments to create impact at scale.

As far back as the 18th century, Adam Smith recognized trust as what Khanna calls "the hidden engine of economic progress." "Frankness and openness conciliate confidence," Smith wrote. "We trust the man who seems willing to trust us." That kind of confidence is critical to entrepreneurial success, but in the developing world, entrepreneurs have to establish it through their own efforts. As Khanna puts it, "The entrepreneur must not just create, she must create the conditions to create."

“In these days, when the buzzwords around business are new technologies, disruption, AI to have advantageous information, substitution of the incumbents, et cetera, it is pleasing to have someone of Professor Tarun Khanna’s stature writing about trust. It made me reflect on my own career with partners based on hiring exceptional people, developing partnerships that worked, avoiding wasteful litigation, and basically moving forward with minimum legal hassle. Trust was probably more important in our progress than the businesses we chose to invest in. It is good that Professor Khanna has called my attention and hopefully that of others to this so important aspect of doing business.” —Jorge Paulo Lemann, Co-founder, 3GCapital, Brazil

“Trust is fundamental to entrepreneurship. Those who generate and, more importantly, retain trust prosper; those who do not eventually become a flash in the pan. Young, first-time entrepreneurs will immensely benefit from Tarun Khanna’s anecdotal book on how to earn trust and respect for one’s pursuit.” —Ratan Tata, Chairman, Tata Trusts, former Chairman, Tata Group, India

“Khanna’s Trust is a refreshing and brilliant view of how individuals and entrepreneurs can build lasting relationships, create more positive conditions in society, and reach past the difficulties of deeply entrenched systems of mistrust. A wonderful companion to Billions of Entrepreneurs.” —Andrónico Luksic Craig, Chairman, Luksic Group, Chile 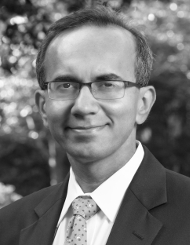 Tarun Khanna is the Jorge Paulo Lemann Professor at the Harvard Business School, where he has sought for two decades to study the drivers of entrepreneurship in emerging markets as a means of economic and social development. For many years, he has served as the Faculty Chair for Harvard Business School activities in India and South Asia. He is also the Faculty Director of The Lakshmi Mittal and Family South Asia Institute at Harvard University.