Manifesto:
On Never Giving Up

Harvard Book Store's virtual event series welcomes Booker Prize–winning novelist, poet, and dramatist BERNARDINE EVARISTO for a discussion of her latest book, Manifesto: On Never Giving Up. She will be joined in conversation by IBRAM X. KENDI, the National Book Award–winning author of Stamped from the Beginning: The Definitive History of Racist Ideas in America.

Admission Ticket - $32.50: Includes one admission link, one copy of Manifesto, and one bookplate signed by the author. U.S. shipping also included. Books will be shipped to ticket-holders following the event. Please note: we are unable to ship internationally.

Bernardine Evaristo’s 2019 Booker Prize win was a historic and revolutionary occasion, with Evaristo being the first Black woman and first Black British person ever to win the prize in its fifty-year history. Girl, Woman, Other was named a favorite book of the year by President Obama and Roxane Gay, was translated into thirty-five languages, and has now reached more than a million readers.

Evaristo’s astonishing nonfiction debut, Manifesto, is a vibrant and inspirational account of Evaristo’s life and career as she rebelled against the mainstream and fought over several decades to bring her creative work into the world. With her characteristic humor, Evaristo describes her childhood as one of eight siblings, with a Nigerian father and white Catholic mother, tells the story of how she helped set up Britain’s first Black women’s theatre company, remembers the queer relationships of her twenties, and recounts her determination to write books that were absent in the literary world around her. She provides a hugely powerful perspective to contemporary conversations around race, class, feminism, sexuality, and aging. She reminds us of how far we have come, and how far we still have to go. In Manifesto, Evaristo charts her theory of unstoppability, showing creative people how they too can visualize and find success in their work, ignoring the naysayers.

Both unconventional memoir and inspirational text, Manifesto is a unique reminder to us all to persist in doing work we believe in, even when we might feel overlooked or discounted. Evaristo shows us how we too can follow in her footsteps, from first vision, to insistent perseverance, to eventual triumph.

“Part memoir and part meditation on determination, creativity, and activism . . . A beautiful ode to determination and daring and an intimate look at one of our finest writers.” —Kirkus Reviews (starred review)

“What a fascinating life Evaristo has led . . . An inspiring yet unassuming memoir from a woman of indomitable creative energy.” —Booklist (starred review)

“In lithe prose, [Evaristo] tackles her complicated relationship with sexuality, reminisces on hustling her early books into readers’ hands and finding ‘a room of my own’ in her writing later in life, and dispenses advice on cultivating creativity and intergenerational consciousness . . . Readers will find much to ruminate over in this meditation on the power of art and persistence.” —Publishers Weekly 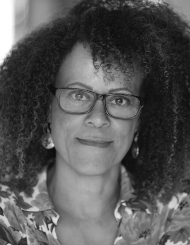 Bernardine Evaristo is the 2019 winner of the Booker Prize for Girl, Woman, Other, which was a national bestseller and a winner and finalist for many awards including the Women’s Prize for Fiction and the Dublin Literary Award. Evaristo is the author of seven other books that explore aspects of the African diaspora. Her writing spans verse fiction, short fiction, poetry, essays, literary criticism, and drama. Evaristo is President of the Royal Society of Literature, Professor of Creative Writing at Brunel University London, and an Honorary Fellow of St Anne’s College, Oxford. She received an OBE in 2020, and lives in London with her husband. Her most recent book is Manifesto: On Never Giving Up.