in conversation with JO ANN BEARD

Harvard Book Store's virtual event series welcomes CAROLYN FERRELL—professor of writing at Sarah Lawrence College and author of the award-winning story collection Don't Erase Me—for a discussion of her debut novel, Dear Miss Metropolitan. She will be joined in conversation by writer and fellow Sarah Lawrence professor JO ANN BEARD, acclaimed author of The Boys of My Youth and Festival Days.

While payment is not required, we are suggesting a $5 contribution to support this author series, our staff, and the future of Harvard Book Store—a locally owned, independently run Cambridge institution. In addition, by purchasing a copy of Dear Miss Metropolitan on harvard.com, you support indie bookselling and the writing community during this difficult time.

Fern seeks refuge from her mother’s pill-popping and boyfriends via Soul Train; Gwin finds salvation in the music of Prince much to her congregation’s dismay and Jesenia, miles ahead of her classmates at her gifted and talented high school, is a brainy and precocious enigma. None of this matters to Boss Man, the monster who abducts them and holds them captive in a dilapidated house in Queens.

On the night they are finally rescued, throngs line the block gawking and claiming ignorance. Among them is lifetime resident Miss Metropolitan, advice columnist for the local weekly, but how could anyone who fancies herself a “newspaperwoman” have missed a horror story unfolding right across the street? And why is it that only two of the three girls—now women—were found? The mystery haunts the two remaining “victim girls” who are subjected to the further trauma of becoming symbols as they continuously adapt to their present and their unrelenting past.

Like Colson Whitehead's The Nickel Boys, Ferrell’s Dear Miss Metropolitan gives voice to characters surviving unimaginable tragedy. The story is inventively revealed before, during, and after the ordeal in this singular and urgent novel.

“Such a beautifully rendered and provocative novel. Ferrell has given me a world I could never have imagined filled with so many people I feel like I’ve always known. A stunner.” —Jacqueline Woodson, bestselling author of Red at the Bone, Another Brooklyn and National Book Award winner Brown Girl Dreaming

“Sometimes, to write about a horrifying trauma and its resounding effects, you have to write toward the heart of the matter in unexpected ways. Carolyn Ferrell does just that in her remarkable, challenging debut novel Dear Miss Metropolitan. This is the story of three girls stolen from their lives by a sadistic man, but it is also about a community that failed each of the girls and what it can be like to emerge from a very dark, damaged place on fragile footing. Dear Miss Metropolitan is a story told in brilliant, jagged fragments. It is a story that will make you uncomfortable and it will make you ache and make you rage. Ferrell's novel is a monumental provocation and heralds great things to come from an immensely talented writer.” —Roxane Gay, author of Difficult Women and Hunger

“Dear Miss Metropolitan is a heart-wreck of a story of how pain and suffering fracture lives, but also a hopeful one that testifies of the human will to survive. While the nexus of the book is unimaginable trauma and its aftermath, Carolyn Ferrell has wrung from it, wondrous beauty. Believeyoume, it’s the kind of book that begs at least two reads: one for the drama propelling you page to page, and another for its inimitable style—the music of its language, the masterful handling of narration, the daring inventiveness. This novel is nothing short of an artistic feat.” —Mitchell S. Jackson, author of The Residue Years

Carolyn Ferrell is the author of the short-story collection, Don’t Erase Me, which was awarded the Art Seidenbaum Award of the Los Angeles Times Book Prize, the John C. Zachiris Award given by Ploughshares, and the Quality Paperback Book Prize for First Fiction. She has also received grants from the Fulbright Association, German Academic Exchange (D.A.A.D.), City University of New York MAGNET Program, and National Endowment for the Arts. Ferrell’s stories have been anthologized in Best American Short Stories 2018 and The Best American Short Stories of the Century, among other places. She teaches writing at Sarah Lawrence College and lives in New York with her husband and children. 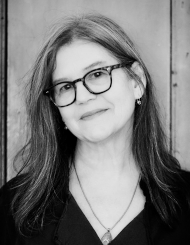 Jo Ann Beard is the author of Festival Days, The Boys of My Youth, and In Zanesville.