The Power of Women:
A Doctor's Journey of Hope and Healing

in conversation with TARANA BURKE

Please note: This event has been canceled

Harvard Book Store's virtual event series and The Panzi Foundation welcome Nobel Peace Prize–winning surgeon and human rights activist DR. DENIS MUKWEGE for a discussion of his soon-to-be-published book, The Power of Women: A Doctor's Journey of Hope and Healing. He will be joined in conversation by TARANA BURKE, the celebrated founder of the "Me Too" Movement and author of Unbound: My Story of Liberation and the Birth of the Me Too Movement.

While payment is not required, we are suggesting a $5 contribution to support this author series, our staff, and the future of Harvard Book Store—a locally owned, independently run Cambridge institution. In addition, by pre-ordering a copy of The Power of Women on harvard.com, you support indie bookselling and the writing community during this difficult time.

About The Power of Women

At the heart of Dr. Mukwege’s message will be the voices of the many women he has worked with over the years. Dr. Mukwege will use individual cases to reassure all survivors that, even if their psychological wounds may never fully heal, they can recover and thrive with the right care and support.

Dr. Mukwege’s dramatic personal story is interwoven throughout as he explores the bigger issues that have become a focus of his advocacy. He will seek to explain why sexual violence is so often overlooked during war, and how governments need to recognize and compensate victims. He will also stress the importance of breaking down the taboos surrounding assault, and the necessity of building a system that supports women who come forward.

His words advocate for saying ‘no’ to indifference and he asks readers to reckon with the West’s involvement in perpetuating sexual violence in places like the Democratic Republic of Congo, and to confront the abuse taking place in their own communities.

Sexual violence does not occur in a vacuum. The conflict in the Democratic Republic of Congo, which has raged for over 20 years and has claimed an estimated 5 million lives, is inseparable from Western patriarchy and economic colonization. And this cycle of violence and spoils is not limited to Congo. Dr. Mukwege’s work has led him to South Korea, Latin America, the Middle East, and elsewhere in Africa, where he has found striking similarities in women’s testimonies.

The truth is, through the intricate ties of the global economy, we are all implicated in violence against women – whether it occurs amidst the fighting in the Democratic Republic of Congo or on college campuses in the West. And Dr. Mukwege’s writing will address men as well, encouraging and guiding them to become allies in the fight against sexual abuse, in war and in peace.

Building more inclusive, gender-balanced societies will require developing what he calls “positive masculinity” – a systemic change in male behavior and attitudes towards women. Dr. Mukwege hopes to inspire other men to speak out and join the struggle, rather than leaving women to fight the battle alone. He will also make the case, drawing from his experience and a wealth of research on the topic, that when women are involved as economic and political decision makers, all of society benefits.

The Power of Women will illuminate the enduring strength of women in the face of violence and trauma, and give hope for the potential of individuals to turn the tide.

Praise for The Power of Women

"The book we all need to be paying attention to now. The voices of women in Eastern Congo reverberate throughout Dr. Mukwege's moving account of the causes and consequences of sexual violence. Weaving together their stories with accounts from across the world, he calls on us all to emulate the strength of women for the sake of the world." —Emma Watson, actor and activist

“There are real heroes out there. There’s Denis Mukwege.” —Michaela Coel, creator of I May Destroy You and author of Misfits

"Dr. Mukwege is a beacon calling men everywhere to a new consciousness. He risked and continues to risk his life to break ranks with a patriarchal culture that licenses violence towards all women. He is an ally, a brother, a visionary of the heart, a healer and a true friend to women across the world." —V (formerly Eve Ensler), award-winning playwright and bestselling author of The Vagina Monologues and The Apology 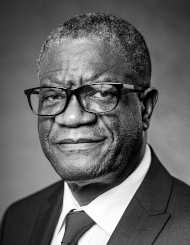 Dr. Denis Mukwege was born in the Belgian Congo in 1955. As a child and young man, he was a first-hand witness to racial prejudices, as well as to the economic and moral decay of the Democratic Republic of Congo under dictatorship. Now a world-renowned gynecological surgeon, he is recognized as the world’s leading expert on treating rape injuries, and his holistic approach to healing has inspired other initiatives around the world. In 2014, he was invited to the White House by Barack Obama. In Europe, he was awarded the prestigious Sakharov human rights prize award, earning him major public recognition for the first time. In 2018, he was awarded the Nobel Peace Prize along with Yazidi human rights activist and sexual violence survivor Nadia Murad. 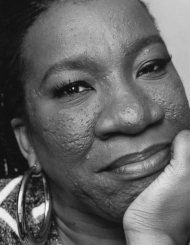 Tarana Burke has always been struck by a commitment to justice and equity. As the founder of the 'me too' movement and subsequent nonprofit, Burke works to dismantle the cycle of sexual violence and other systemic issues that disproportionately impact marginalized people. She was 2017 TIME Person of the Year and the winner of the 2019 Sydney Peace Prize, and has been the recipient of countless other accolades. She is the author of the New York Times bestseller Unbound and co-editor with Brené Brown of the instant New York Times bestseller You Are Your Best Thing.

Co-Sponsored by The Panzi Foundation

Panzi Hospital and Foundation (Panzi) in the Democratic Republic of Congo has earned a global reputation as the preeminent treatment center for survivors of sexual violence in conflict. Since its inception in 1999, more than 85,000 women suffering from rape- or birth-related complications have been treated by Panzi's founder, Dr. Denis Mukwege, and his expert staff. Thousands of women and girls have also benefited from Panzi's innovative holistic healing model that combines medical care with psychosocial support, access to legal services, and socio-economic reintegration opportunities to help survivors rebuild their lives. To learn more about Dr. Mukwege and Panzi's work, visit www.panzi.org.