Nine Continents:
A Memoir In and Out of China

Harvard Book Store welcomes award-winning film director XIAOLU GUO—named one of Granta's Best of Young British Novelists—for a discussion of her memoir, Nine Continents: A Memoir In and Out of China. This event is co-sponsored by the Fairbank Center for Chinese Studies and the Harvard Film Archive.

Xiaolu Guo is one of the most acclaimed Chinese-born writers of her generation, an iconoclastic and completely contemporary voice. Her vivid, poignant memoir, Nine Continents is the story of a curious mind coming of age in an inhospitable country, and her determination to seek a life beyond the limits of its borders.

Xiaolu Guo has traveled further than most to become who she needed to be. Now, as she experiences the birth of her daughter in a London maternity ward surrounded by women from all over the world, she looks back on that journey. It begins in the fishing village shack on the East China Sea where her illiterate grandparents raised her, and brings her to a rapidly changing Beijing, full of contradictions: a thriving underground art scene amid mass censorship, curious Westerners who held out affection only to disappear back home. Eventually Xiaolu determined to see the world beyond China for herself, and now, after fifteen years in Europe, her words resonate with the insight of someone both an outsider and at home, in a world far beyond the country of her birth.

Nine Continents presents a fascinating portrait of China in the eighties and nineties, how the Cultural Revolution shaped families, and how the country’s economic ambitions gave rise to great change. It is also a moving testament to the birth of a creative spirit, and of a new generation being raised to become citizens of the world. It confirms Xiaolu Guo as one of world literature’s most urgent voices. 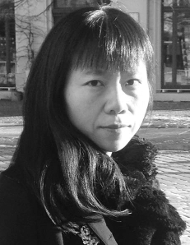 Xiaolu Guo is the author of Village of Stone, A Concise Chinese-English Dictionary for Lovers, Twenty Fragments of a Ravenous Youth, and I Am China. She has been named one of Granta's Best of Young British Novelists. Guo has also directed several award-winning films including She, A Chinese and a documentary about London, Late at Night. She lives in London and Berlin.

Co-Sponsored by the Fairbank Center for Chinese Studies


Founded in 1955, the Fairbank Center exists to advance scholarship in all fields of Chinese studies at Harvard. Learn more at fairbank.fas.harvard.edu.


Founded in 1979, the Harvard Film Archive is both a repository of an extensive collection of film and film-related materials as well as a revered cinematheque featuring old and new films out of the current mainstream. Learn more at hcl.harvard.edu/hfa.