The Terror Years:
From al-Qaeda to the Islamic State

Tickets on sale now ($5 or book-included)

Harvard Book Store welcomes Pulitzer Prize–winning author of The Looming Tower LAWRENCE WRIGHT for a discussion of his latest book, The Terror Years: From al-Qaeda to the Islamic State.

About The Terror Years

With The Looming Tower, Lawrence Wright became generally acknowledged as one of our major journalists writing on terrorism in the Middle East. Here, in ten powerful pieces first published in The New Yorker, he recalls the path that terror in the Middle East has taken, from the rise of al-Qaeda in the 1990s to the recent beheadings of reporters and aid workers by ISIS.

The Terror Years draws on several articles he wrote while researching The Looming Tower, as well as many that he’s written since, following where and how al-Qaeda and its core cultlike beliefs have morphed and spread. They include a portrait of the “man behind bin Laden,” Ayman al-Zawahiri, and the tumultuous Egypt he helped spawn; an indelible impression of Saudi Arabia, a kingdom of silence under the control of the religious police; the Syrian film industry, at the time compliant at the edges but already exuding a feeling of the barely masked fury that erupted into civil war; the 2006–11 Israeli-Palestinian conflict in Gaza, a study in the disparate value of human lives. Other chapters examine al-Qaeda as it forms a master plan for its future, experiences a rebellion from within the organization, and spins off a growing web of worldwide terror. The American response is covered in profiles of two FBI agents and the head of the intelligence community. The book ends with a devastating piece about the capture and slaying by ISIS of four American journalists and aid workers, and our government’s failed response.

On the fifteenth anniversary of 9/11, The Terror Years is at once a unifying recollection of the roots of contemporary Middle Eastern terrorism, a study of how it has grown and metastasized, and, in the scary and moving epilogue, a cautionary tale of where terrorism might take us yet.

"Vivid firsthand reportage . . . Wright investigates every facet of the shadowy conflict [in] these dispatches from the frontlines of the 'war on terror.' He writes with empathy for every side while clearly registering the moral catastrophes that darken this pitiless struggle.” —Publishers Weekly

"A brilliant volume that is a must-read for anyone looking for greater illumination of the baffling world of religious extremism." —Carl Hays, Booklist

"Wright displays his top-notch reporting in stories about a disintegrating Syria, the never-ending conflicts between Israelis and Palestinians, the faith-based beliefs that undergird al-Qaida and the Islamic State group, and the massive failures of American intelligence agencies . . . Yet more great work from a dedicated journalist." —Kirkus Reviews 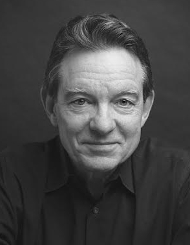 Lawrence Wright is a staff writer for The New Yorker, a playwright, a screenwriter, and the author of ten books of nonfiction, including The Looming Tower, Going Clear, and God Save Texas, and one previous novel, God’s Favorite. His books have received many honors, including a Pulitzer Prize for The Looming Tower. He and his wife are longtime residents of Austin, Texas.

All pre-sales tickets include a copy of The Terror Years, admission into the event, and a $5 coupon for use in the bookstore. Pre-sales tickets (online only) are available for two weeks, after which a $5 ticket option will also go on sale. Books bundled with pre-sale tickets may only be picked up at the venue the night of the event, and cannot be picked up in-store beforehand.