The Incomplete Book of Running

About The Incomplete Book of Running

At the verge of turning forty, Peter Sagal—brainiac Harvard grad, short bald Jew with a disposition towards heft, and a sedentary star of public radio—started running seriously. And much to his own surprise, he kept going, faster and further, running fourteen marathons and logging tens of thousands of miles on roads, sidewalks, paths, and trails all over the United States and the world, including the 2013 Boston Marathon, where he crossed the finish line moments before the bombings.

In this new book, Sagal reflects on the trails, tracks, and routes he’s traveled, from the humorous absurdity of running charity races in his underwear—in St. Louis, in February—or attempting to “quiet his colon” on runs around his neighborhood—to the experience of running as a guide to visually impaired runners, and the triumphant post-bombing running of the Boston Marathon in 2014. With humor and humanity, Sagal also writes about the emotional experience of running, body image, the similarities between endurance sports and sadomasochism, the legacy of running as passed down from parent to child, and the odd but extraordinary bonds created between strangers and friends. The result is a funny, wise, and powerful meditation about running and life that will appeal to readers everywhere.

“Sagal has created a new genre—the five-minute-mile memoir. Combining commentary and reflection about running with a deeply felt personal story, this book is winning, smart, honest, and affecting. Whether you are a runner or not, it will move you.” —Susan Orlean

“This is a brilliant book about running, and it’s brilliant even if you never have—and never want to—move faster than a shuffle. Ostensibly, Peter’s subject is the physical activity itself. (Feh, as far as I’m concerned.) In fact, the book is a manifesto on the redemption of escape. And, even more so, a meditation on the direction of flight. Whatever you’re running from, you’re running to something else. What Peter runs toward is strength, understanding, endurance, acceptance, faith, hope, and charity.” —P. J. O’Rourke

“Peter Sagal is the funniest person on radio (quick reminder, I am on television).  I enjoy listening to Peter on Wait, Wait . . . Don’t Tell Me! on the weekend while chopping vegetables for soup. It will be nearly impossible to do that while reading this book, so if someone could bring me some carrots and onions in half-inch dice, that’d be great.” —Stephen Colbert 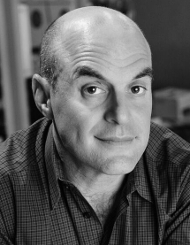 Peter Sagal is the host of the Peabody Award-winning NPR news quiz Wait Wait...Don’t Tell Me!, the most popular show on public radio, heard by five million listeners each week. He is also a playwright, a screenwriter, the host of Constitution USA with Peter Sagal on PBS, a one-time extra in a Michael Jackson music video, a contributor to publications from Opera News to The Magazine of the AARP and a featured columnist in Runner’s World. He’s run fourteen marathons across the United States. Sagal lives near Chicago with his wife Mara.

Tickets are available online only at harvard.com and harvardbookstore.eventbrite.com. All tickets for this event include a $5 coupon for use in the bookstore. Pre-sale tickets include a copy of The Incomplete Book of Running. Books bundled with pre-sale tickets may only be picked up at the venue the night of the event, and cannot be picked up in-store beforehand.