Parwana:
Recipes and Stories from an Afghan Kitchen

While payment is not required, we are suggesting a $3 contribution to support this author series, our staff, and the future of Harvard Book Store—a locally owned, independently run Cambridge institution. In addition, by purchasing a copy of Parwana on harvard.com, you support indie bookselling and the writing community during this difficult time.

Parwana tells one family's story of a region long afflicted by war, but with much more at its heart.

Author Durkhanai Ayubi's parents, Zelmai and Farida Ayubi, fled Afghanistan with their young family in 1987, at the height of the Cold War. When their family-run restaurant Parwana opened its doors in Adelaide, Australia in 2009, their vision was to share an authentic piece of the Afghanistan the family had left behind, a country rich in culture, family memories infused with Afghanistans traditions of generosity and hospitality.

These recipes have been in the family for generations and include rice dishes, curries, meats, dumplings, Afghan pastas, sweets, drinks, chutneys and pickles, soups and breads. Some are celebratory special dishes while most are day to day dishes. Each has a story to tell.

With beautiful food and location photography, this compilation offers valuable insights into the origins and heritage of Afghan cuisine and a fresh perspective to one of the oldest civilizations.

"Daughter-mother duo Durkhanai and Farida Ayubi intertwine history and food, and the personal and political, in this rich collection of Afghan recipes. 'Of the millions of families displaced, mine was one,' she says of their flight in 1985 from Afghanistan, when the aura of the nation had been scrambled. Tying together the threads of their journey (they now own two restaurants in Australia) are family photos and an enticing array of dishes pictured in bold colors . . . Parwana—the name of the family's first restaurant—is Parsi for butterfly, and Ayubi's family's story is one of metamorphosis, elegantly told and deliciously accompanied." —Publishers Weekly, Starred Review

"Restaurateur Ayubi's Afghani relatives fled their native country to settle in Adelaide, Australia, supporting themselves via their restaurant Parwana ('butterfly') and, later, a deli. Ayubi begins the book with a narrative of the Afghan nation, its domination by the Brits, Russians, and others; the violence there; and the peoples displaced. Into these skillfully told stories, Ayubi weaves the cross-pollinating of foods, culture, and recipes . . . This is an homage to the strength and spirit of refugees, as well as a delicious reminder of what adventurous U.S. cooks can create." —Booklist (starred review) 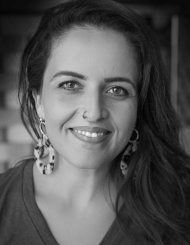 Durkhanai Ayubi is a freelance food writer and restaurateur involved with the day-to-day responsibilities of two family-run eating places: Parwana and Kutchi Deli Parwana. She has written for a number of international newspapers and websites and is currently undertaking a Fellowship for Social Equity funded by the Atlantic Institute in New York. She is the daughter of Afghani refugees Zelmai and Farida Ayubi who settled in Australia to raise their family. She tells the family story from her perspective, channeling her mother and father’s memories and recipes. Parwana is her first book.